FCS: Closer Than Ever 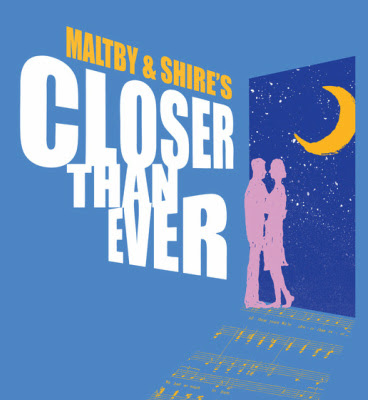 Synopsis: There isn't a synopsis.  It's a revival of the musical revue featuring music by David Shire and lyrics by Richard Maltby.  Maltby also directed this production.

My thoughts: This will probably be the shortest version of "my thoughts" yet!  It was a thoroughly enjoyable evening.  The music by David Shire is constantly surprising - in a thrilling way.  The lyrics by Richard Maltby are clever, even if they do come off sometimes a bit dated (which, I suppose, is to be expected out of a show first performed in 1989).

All four actors gave strong performances.  The far and away standout was Jenn Colella.  In addition to brilliantly singing this demanding show, she was masterful in telling the story of each character she sang and played.  Additionally, Christiane Noll shone in her excellent performance of "Life Story" - a brilliant song!

The other star of the production, from my perspective, was Andrew Gerle on the piano (with one surprising and delightful vocal cameo, too!).  Throughout the show I found myself drawn to his work - often more than the actors.

The real take away for me tonight, however, is learning about York Theatre.  It's a charming little venue beneath St. Peter's Lutheran Church at Lexington and 54th.  I arrived early (as is my custom) and did get to peek into the worship space for a bit.  It's a fascinating modern design that takes advantage of the city as a backdrop for worship.  The campus is large, and mostly commercial, which undoubtedly produces revenue for the parish.

The theater company itself is dedicated to supporting new works of musical theater through fully staged productions and scores of developmental readings.  It only rarely does revivals like this.  Numerous shows that went on to be big have gotten their starts in this little company.  I look forward to following them now that I know they exist!