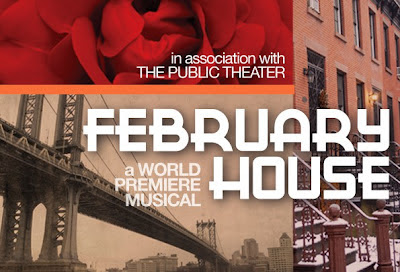 Synopsis: The story of a group of artists - writers and musicians - living communally for a season in Brooklyn at the dawn of the second World War - based on real events.

My thoughts: I hardly know where to begin.  This was my weekend of seeing shows that I knew nothing about.  Both world premiere productions of new musicals.  These kinds of things can be a bit hit or miss.  It takes something of a spirit of adventure to give yourself over to a new work like this.

Tonight, that sense of adventure within me was richly rewarded!

February House, with music and lyrics by Gabriel Kahane and book by Seth Bockley is one of the smartest, most emotional, and most enjoyable nights at the theater that I've had in a very long time.  I haven't had my sense of creativity so excited by a show sense seeing The Blue Flower.  While that show was creative in it's unique approach to musical theater, February House, though fairly traditional, is entirely creative.  The score is wrenchingly beautiful - intoxicating and enthralling with elements of jazz, blues, bluegrass, and folk.  The lyrics are witty and profound.  And the story as a whole - while not action driven, and never pretends to be - is driven by intellectual experimentation, as must have been experienced among the assembled characters.

It's the story of George Davis, who feels inspired to bring together some of the greatest minds of his generation, for an experiment in communal living.  He invites Carson McCullers, the southern writer, W.H. Auden, the poet, and Benjamin Britten, the composer.  Eventually Erika Mann and Gypsy Rose Lee join them.  Auden and Britten each bring lovers to join in the experiment.  Auden is with the young Chester Kallman, an aspiring poet, and the very closeted Britten brings Peter Pears, an opera singer.

And all of them bring lots of baggage.

I was first attracted to this show thinking how fascinating it must have been to have had such an assemblage of talent and intellect.  But pretty quickly I realized that the real driving force behind the show was not the star power of the residents, but their shared experience: they were the leading outcasts of their era.  They came together for mutual stimulation, for healing and escape, and for community in a world that pillaged their gifts but rejected their humanity.

The set, though fairly simple in design (designed by Riccardo Hernandez), was faithful to the experience.  The show opens with George (played by Julian Fleisher) singing a love song to a chair - a chair whose elegance and charm inspires for him a lifestyle.  And that chair - that opening focal point - stands on its own.  It isn't a part of any set.  But together, with all of the other mismatched bits of elegance around the house, reflects the mismatched bits of greatness of its residents.

February House is one of those shows that deserves a cast recording.  Moreover, it's audience needs it.  The music and lyrics are worthy of further study.  Many of the songs were beautiful and moving.  But all of them were brilliant.  If a recording were to exist, it would appear often in my playlists.  My favorite song of the evening was "Awkward Angel" - perhaps one of the most perfect love song I've ever heard, sung by Auden of his lover Chester.  That song alone would be worth the price of a CD.  But the entire score should be studied, pondered, and digested. (Update - Playbill is reporting just today that it IS getting a cast recording!  Kahane is reporting on his twitter account that the recording will happen on Monday, June 18th - the day after the production closes.  So I'd look for something like a late-August release date.)

The performers were all excellent, but two standouts were Stanley Bahorek in the role of Benjamin Britten and Kristen Sieh in the role of Carson McCullers.  While I never believed Sieh's approach to a Georgia accent, her singing was among the many highlights of this brilliant performance.  Her performance was intense and delicate.  When she whispered emotion she drew me ever deeper under her spell.  (Update - after a little more research, I've read one review in which the reviewer compared Sieh's portrayal of McCullers as a near-perfect reproduction of recordings that she'd heard.  I'll be the first to admit that the panorama of Southern accents - in their variations of race, class, geography, and time - is wider than most people understand.  So I'm willing to concede that the accent may be on target - it's just not one I know...)  Bahorek also sang beautifully.  His approach to his character was genuine and evocative.

Overall I was simply wowed by this show - from every technical and creative aspect, to the caliber of the performance.  My only regret in seeing it is that I waited so long.  It closes in just two days.  If I had seen it earlier I could have spread the word to the many people I know who would have appreciated it and perhaps even have had a chance to see it again!