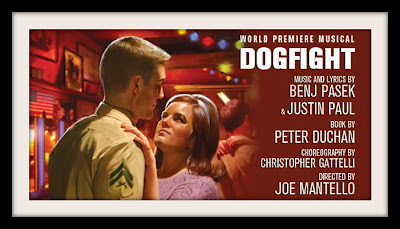 Synopsis:  The story of three Marines on the night before they deploy for a tour at the beginning of the Vietnam War.  They take one last night on the town together.  They, and their other friends, have a game that they play - the dogfight.  The purpose of this game is to get the ugliest girl as a date.  They bring their dates to a bar to have them judged during a dance.  Then (surprise, surprise!) the leading man falls in  love with the "dog" he brought.

My thoughts:  I mostly went to see Dogfight because my favorite choreographer, the Tony-winning, rock star choreographer of Newsies, Christopher Gattelli, did this show also.  I've become a huge fan of his work, not just in Newsies, but also Godspell, and even Silence! The Musical.  All of these shows have been very different, and Mr. Gattelli's work has been very different as well - which is part of why he's become my "favorite" choreographer.  His work is true to the show he's working on.  The dance has a way of fitting in so naturally that it's almost hard to remember that it's there.  The performers seem to be just doing the most natural thing that they could possibly be doing.  I don't know how he does it, but it's a beautiful thing to see.  He's not just finding a gimmick that works and beating it to death in every show he does.  He gives each show the attention and creativity each show deserves.  His style isn't a particular dance or jump or pattern of movement.  His style is that he has this amazing ability to let each show he does be its own self.  That's the truest measure of creativity and artistry, and I admire him.  I'm not really a "dance" person.  I know almost nothing about dance.  But I do respect creativity, and that's how I came to have a "favorite choreographer".

While I was delighted to see Gattelli's work again, Dogfight wasn't my favorite show.  It wasn't bad, or anything, but it really just didn't grab me.  I felt a little emotional at the end, but not more than I would from one of the better episodes of Grey's Anatomy, or something like that.  The music, by Benj Pasek and Justin Paul, was interesting and had some lovely intricate moments, but it left the show a little too short on big, climactic production numbers, and nothing left me humming my way out of the theater.  Some of it was actually a bit tedious - particularly the scene in the bar while the "dogfight" was going on.  I would probably buy a cast recording of the show (a pretty low bar for me, I know...) to hear a few of the harmonies again, and to see if, perhaps I missed something the first time around, but on the whole I didn't hear anything that left me excited about the future of musical theater.  This reality was further challenged by a sub-par performance by Josh Segarra in the role of Boland.

But there were brilliant aspects of the production.  I was particularly moved by the lighting design by Paul Gallo - particularly in the opening sequence.  All was black and a sweet song, sung by Lindsay Mendez, in the role of Rose Fenny, began.  Slowly, a silvery-blue spotlight emerged shining down from above center stage, to reveal Mendez singing and playing the guitar behind a tinted glass.  As the song grew, the lights slowly built the set for us, revealing its levels and ins and outs, and the emerging cast.  Gallo's work drew me in.  He carried me away from Midtown Manhattan on a Sunday afternoon and transported me to the world of Dogfight.  It was masterful.

It was also a delight to see the work of Nick Blaemire again.  In Godspell he was the slapstick comic relief man.  This show pulled him in a different direction.  His work is eye catching.  He wasn't, by design, the center of attention in this show, but he has a quality that commands attention.  I look forward to seeing more of his work!

The audience attending this performance was something other than I'd have expected.  It was surprisingly young, and surprisingly male.  I'm curious what the draw was for them.  Being set in the Vietnam era, I expected the audience to be mostly middle-aged couples - people who might remember those days.  But among the people right around me, I was in one of the older age brackets.

While Dogfight wasn't the best show I've ever seen, on the whole it was a satisfying afternoon of theater.  It was entertaining enough.  Funny enough.  The music was fine.  There were a few hiccups in the story-telling as it was expressed through the book by Peter Duchan (the conflict between Birdlace and Boland about the rigging of the dogfight wasn't very completely developed), but on the whole it was nice experience.  I was glad to have gone.