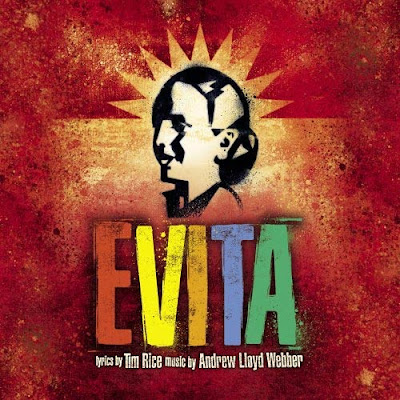 My thoughts: I know, I know...  I went to see Evita without Ricky Martin.  Frankly, that's the only way I could get tickets.  The show has been grossing well over a million dollars a week since it opened, so if I was ever going to see this production, I knew I'd have to wait to see it without the *star*...

While I'm sure Ricky Martin is doing a fabulous job portraying Che, there's a degree to which I'm glad to have seen the show without him.  I could think about this production on its own merits.  And frankly, I am much more interested in the production than I almost ever am in any particular star within it.  Part of how I could see the show a bit more objectively is that I'm not seeing it with hordes of people who are screaming fans there not to see a Broadway musical, but to see an individual within it.  I learned that the hard way with Daniel Radcliffe in How to Succeed in Business Without Really Trying.

Before tonight, I had no experience of the stage version of this show.  I have, of course, listened to several cast recordings from various productions, but I had never seen it performed live.  I'd only seen the 1996 film version staring Madonna.  So that's my point of reference - not earlier stage productions.  I don't know at all how or if this production altered anything.

But comparing it with the film version, there were some points where the story seemed less developed than I'd come to expect.  In the stage version, the songs seem to stand alone more than they did in the film.  They would appear for a scene, then vanish.  In the film version Eva's character in particular was more developed through the weaving of these stories and songs.  The example that comes to mind was in the scene when she displaces the young girlfriend of Juan Peron.  The song is "Another Suitcase in Another Hall" on the new cast recording (track 12).  While the tune is lovely, and ably performed by everyone, it lacked the depth of emotion and revelation as in the film version, because we didn't see Eva in the young girl's displaced position just a few scenes earlier.  Similarly, when Eva is going through her streams of men, she is less sympathetic in the stage version, because it isn't underscored as blatantly by Magaldi's having tossed her aside in the previous scene.

In terms of the production value - it was as off-the-charts, and top notch as anything I've ever seen.  The sets, designed by Christopher Oram, were fantastic.  They were realistic and grandiose.  My mind often wandered back to the majestic and nearly magical sets that I'd seen several years ago in the Broadway production of Sunset Boulevard.  From the opening few scenes to the larger set that would emerge as the primary backdrop throughout most of the show, the transition was one of those that left the audience marveling.  It was definitely a "How'd they do that?" moment.

The production was lit (by Neil Austin) with a kind of sepia feel.  In contributed nicely to the historiographical nature of the show, as well as to the tone of economic depression experienced by the descamisados - the force behind Eva's rise.

There were really no standout performances.  Max von Essen was the closest, but even he blended effectively with the rest of the ensemble.  Elena Roger, in the role of Eva, was clearly designed to be a standout performance, but sadly, she didn't answer the call.  Many of her high notes seemed beyond her range (to the point of painful sounding screeches), and her treatment of the Argentinian accent was a complete failure.  She sounded more like the old Bavarian woman from Candide.  The accent seems to mostly work on the cast recording, but it failed miserably in this performance.  Fortunately, I do know the music of the show well enough to have been able to follow her, but if I hadn't been reciting the show in my mind, I would have missed far too many of the lyrics.

In general, it was a flashy production that mostly worked and was certainly entertaining, but it didn't at reach me at all emotionally.

Another benefit of the star being absent - I didn't have to suffer through an undeserved standing ovation!