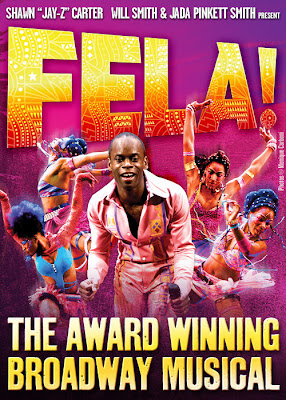 Synopsis: The musical based on the life and music of Fela Anikulapp-Kuti, the Nigerian Afrobeat musician and revolution leader.

My thoughts:  I had been wishing to see this show a couple of years ago when it was in its original Broadway run.  I didn't know a lot about the show, just that it was focused on African music.

Since the original Broadway run, the show has been on tour for a couple of years.  Now the tour is ending and they've returned to Broadway for a very limited run - only 32 performances, and it ends this Saturday!

I'm so delighted that I did finally see this show.  The music is admittedly a little out of my usual comfort zone, but that was more than okay.  It brought back for me memories of my times in evangelical churches in a township in Cape Town, South Africa and Accra, Ghana.  The music that Fela helped to inspire and pull together has swept the continent of Africa and it resonates even today.

Because of the very different style of music from most musical theater, Fela! is a bit of an oddity among Broadway shows.  True to the story that it tells, much of it has an improvisational feel.  It's the story of the Fela's attempts to lead a revolution against government corruption in Nigeria following years of colonial rule.

Fela is, by design, the one real star of the show.  But the ensemble worked beautifully to share in telling his story, to support him, and to establish that culture and mood which is so much more than simply foreign for most Americans.  The whole cast worked beautifully together, and watching the high energy spectacle left me wide eyed.

If there was a "star" aside from Fela, himself, it would have been Melanie Marshall in the role of Funmilayo, Fela's mother - one of the ancestors that guides him on his difficult journey.  She has the natural, tempered grace of African women I've known, and supports the show and the story with unmatched vocal quality.

The other shining figure was Rasaan-Elijah "Talu" Green in the role of the djembe player, Mustafa.  Though he never spoke or sang, other than perhaps with the ensemble, his drumming drove the whole show - and really the whole experience.

The setting of the show was an evening in Fela's "African Shrine" in Lagos, Nigeria.  The story was told to us, the audience, as if we were in the crowd at the real shows he would produce living there.  So the set in general reflected that - corrugated metal, graffiti...  The lighting was rock concert style lighting and the story-telling was enhanced by liberal use of projections.  Though, because of the setting it didn't fall into the "overuse" category that I so often bemoan!

The real thrust of my love for this show, however, was simply reveling in the idea of music and dance as tools of revolution.  Fela masterfully used his talent to further the goal of social change in Nigeria.  And that's when art is most exciting to me - when it's not just an exercise in self-promotion or self-gratification (for either the artist or the audience), but a way of speaking to the culture - calling it out and driving it forward.

As I said, I didn't know much about the story of Fela or about the story of Afrobeat culture, but Fela! has inspired me to dig deeper.  I want to know more and I want to learn.  Which is, of course, a sign that not only was Fela effective, but that Fela! is, too.  It's living beyond the couple of hours that it had me, and inspiring me to go deeper.  That's success!