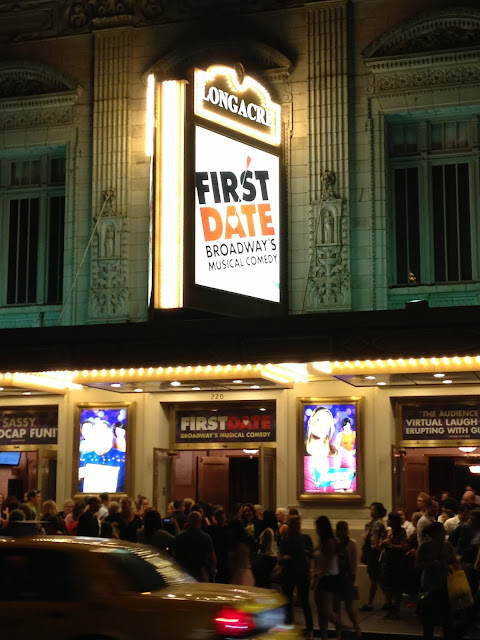 Synopsis: A musical comedy about a blind date.

My thoughts: Whenever my family gets together, there's usually a fair bit of beer consumed, and then it's not long before the guitars, banjos, and mandolins come out and we all start singing.  We'll be sitting on a porch somewhere in the cool night air singing whatever comes to mind - hymns, southern gospel, old time "country gold", Janis Joplin, early 20th-century folk music...  You never know what you'll hear.  Maybe someone will call out a request, or maybe just start singing and others will join in.

Uncle Donny is our de facto "musical director" for these occasions, mostly because he's just the most accomplished, versatile, and regularly available instrumentalist we have.

Every now and then, when someone makes a request, Uncle Donny will take a stab at it for a few measures before declaring, "That song ain't got no tune!"

We all laugh and move on to whatever is next...

First Date is a musical composed of songs that "ain't got no tune".  It was actually painful to sit there for an hour and a half.  The one redeeming aspect of this stupid little show is that it didn't endeavor to be a full-length, two and a half hour nightmare.

There were funny moments, but mostly it relied on gratuitous foul language, cheap sexual expletives, and exploiting stereotypes to lazily get laughs from an audience with low expectations.

Let me be clear: I have NO problem whatsoever with so-called "bad words" or sexual expression.  What I do have a problem with is laziness and bad writing.

This is the kind of show that if I'd seen it as an original work produced by a college theater department, or maybe as a part of some fringe festival, I might think it was cute and a good effort.  But for a Broadway production it was offensive.  Again - not offensive because of the crude attempts at humor, but offensive because the audience deserves more.

One of the brightest spots (an admittedly low bar, but a bright spot, nonetheless) was the performance by Zachary Levi in his Broadway debut.  Levi has performed extensively in film and television, but this was his first at-bat on the Broadway stage.  Somehow he rose above the substandard book and score and still managed to charm.  It would be great to see what he might do with a show that was worth our time!

Unfortunately, the same cannot be said for his co-star and Broadway veteran of Smash (television) fame, Krysta Rodriguez.  Her acting was ably performed, but she seemed vocally strained through much of the performance.

Despite the structural weaknesses of the show they were there to support, the creative arts team gave the production something significant.  Most notable was the work of David Gallo as Scenic and Media designer.  The set was fairly simple, engaging, and skillfully contributed to the story-telling (even if the story itself shouldn't have been told...).  His shining achievement was in his projection designs.  They demonstrated a cleverness and subtlety that rose above anything else offered by any other aspect of the production.  I was particularly impressed by the cute decision at one point to use the actual speakers on the edge of the proscenium as a projection surface.  It was the only redeeming characteristic of that particular song!

All in all, First Date was just as disappointing and awkward and interminable as most actual first dates.