FCS: Once We Lived Here 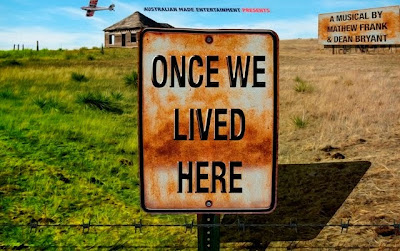 Synopsis: The U.S. premiere (produced by Australian Made Entertainment) of Once We Lived Here explores the dynamics of a family reeling with loss: both of their father/husband, and the sheep farm that their family is losing to a severe drought after generations of living and working there.

My thoughts: After my last couple of outings having been sort of disappointing, I was starting to question myself.  I was starting to wonder if perhaps I was becoming a jaded theater goer.  Have I seen so much theater, and is the bar now so high, that now nothing can rise to meet it?  Can I only see negatives?  Will I only ever be annoyed?

Thankfully, Once We Lived Here, by Australian writing team Matthew Frank and Dean Bryant, has brought me back.

From the start, the show had me hooked.  The overture set the tone for a show that would be emotional, rich, and thoughtfully constructed, and it never disappointed.

I'd like to focus for a moment, however, on that word: thoughtful.  I often praise shows for being clever.  In some ways, that's among the highest praise I usually offer.  But this went a step beyond.  It was clever, to be sure, but it was more than that.  It was more than smart, even.

I've often said of preaching that crafting a sermon is more like writing a poem than it is like writing an essay.  Each word must be calculated - each pause, each breath.  It's not enough to write to convey a message, the preacher must endeavor to write to speak to his or her audience.  In my stronger sermons, that's what I'm reaching toward.

The same is true of the theater.  It's not enough to write a good song.  It's not even enough to tell a good story.  The book writer and the lyricist and the composer have to strive for something more.  They have to strive to really communicate - not just with words, but with emotions.

It's not enough to just do everything right.  Everything right must be constructed - painstakingly - to bring together a piece of art.  Each brush stroke must be delicately applied and necessary - never too much, always enough.

The thing about shows like this, however, is that they're not just difficult to write.  They can be very difficult to perform and to produce.  You need a team of artists who will give it the attention and the quality that it deserves.

That's where this went from being a good show, to being a mind blowing night of theater.

Being Off-Off Broadway (a designation related to the seating capacity of the theater more than anything else), it could have been hit or miss.  I'm usually willing to take a chance on Off-Off Broadway shows, because, first of all, they usually don't require much of an investment.  Even full price tickets tend to be quite inexpensive.  Beyond that, it gives me an opportunity to see newer works (sometimes still in development), riskier works, and up-and-coming performers and creative designers.

The downside of that can be that you catch something (or someone) that misses the mark.  But every now and then you'll catch a moment of magic, like I did tonight.

The show opens with the number "All Roads Lead to Home".  There's a tint of sentimentality in that, but it's quickly revealed that the real purpose of the song isn't so much to elicit sentimentality as it is to remind us of the primary focus of the show: the baggage that we all carry related to our families of origin.

Years after the husband and father of the family had died and the family's parts had begun to splinter, they all come home for what would be one last visit.

Claire, the mother, is now dying, and soon the family home would have to be sold.  Shaun, the only son, is the heir of his father's depression.  Amy, one of two daughters - the one who stayed home - is desperately trying to become the best of her father, following in his footsteps.  Lecy, the one that got away, is just as desperately searching for her father's love through Burke, the one-time farm hand who becomes her best icon of her late-father.

The story and the music are intricate and complex, and nothing could have been achieved without an outstanding team to deliver it.  The cast was truly an ensemble, and everyone played their equally-significant parts beautifully, but even so, two actors in particular captured me.

The first was Adam Rennie in the role of Shaun.  His voice is simply thrilling.  I remember when I was in voice lessons and my teachers tried to give me an image for singing with strength - they taught me to imagine the sound coming from deep inside me and rising up through my front teeth and pounding into a brick wall across the room.  That seemed to happen with Adam every time he opened his mouth.  It was magic.  I can't wait to hear him again.  And again.

The other shining star of the night was Kathleen Foster in the role of Amy.  She brilliantly drew me into her character and emotions.  I've rarely been touched by any actors on a stage more than these two touched me tonight.

Even the best actors and the best shows need a team of creative people behind them helping to make it all happen.  Notable among the creative team were Scenic designer, Katherine Deneve and Lighting designer Anthony D. Freitas.

The set began to pull me in even before the show began.  I like to get to theaters early to absorb the space and to get comfortable with my surroundings before the show begins.  It occurred to me tonight, in this little theater, that getting into the theater the moment the house opens and waiting for the show is my favorite kind of meditation.  Tonight I had an interesting and engaging set to guide that process.

Deneve's set was simple and articulate.  From the loose pebbles edging the buildings to the perfectly distressed wood and aged hardware - it all communicated.  It didn't shout.  It didn't try too hard.  It was simply artful and compelling.

Similarly, the lighting design for this show could have been boring or unhelpful.  It could easily have been simply a matter of turning them on and off between scenes.  It's not the kind of show that lends itself to wild, rock concert kinds of displays.  But Freitas took things a step further.  The lights were elegant and unobtrusive, but gently guided us from place to place and time to time - from the present to the memory.  It pulled us in the audience along, giving us subtle cues as to where and when we were or needed to be.

Despite the difficult subjects explored in this show, it rises out of its darkest moments in the end.  The finale brings us back to the opening song, "All Roads Lead to Home".  It's still never "sentimental", but it has a hope that was somehow missing at the start of the show.  It's not exactly "happy" as an ending, but it's hopeful.  It's content.  And it points to something more.

Once We Lived Here is the kind of show that makes me optimistic about the state of musical theater.  It exemplifies what a show can do.  It reaches in your gut, squeezes you and twists you and pushes all of your shit aside.  Just when you wonder if you can take it anymore, it puts everything back, better than it was before.

It does more than entertain.  It informs a broader worldview.  It heals and caresses those once-hurting parts that we all have.  It speaks to the soul.