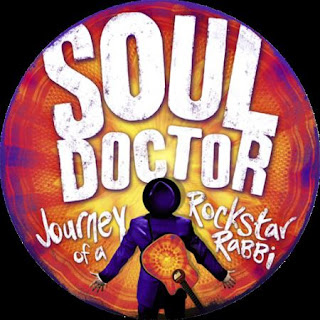 Synopsis: The story of a rabbi in the 1960s reconciling his traditional beliefs with the changing times.

My thoughts: Nothing about Soul Doctor was great, but a lot was good.  Granted, I may have been coming into it from a better than average perspective.  For one - I had great company - a friend who I don't get to see nearly often enough!  Also, it had been three and a half months since I'd been inside a Broadway theater!!  I was jonesing...  In such conditions, it probably would not have taken much to satisfy me!

My initial reaction is that it's kind of like a cross between a Jewish version of Hair and Leader of the Pack - the short-lived 1985 musical with a weak book telling the story of Ellie Greenwich - a writer of many popular songs in the 1960s.  Really, the second musical in that juxtaposition could have been any "Behind the Music"-esque jukebox musical, but I chose Leader of the Pack because of its self-indulgence and obscurity.  Soul Doctor struck me as both.  Though it's clearly not self-indulgent for the now deceased Schlomo Carlebach - something tells me it is for someone.

The book by Daniel S. Wise (also co-creator and director) was weak.  It felt as if its primary purpose was not to tell a good story, but to educate the audience about a story that the writer thought the audience ought to know.  The truth is, it is a good story - and it probably is one that people would benefit from hearing.  But the moment a show moves from story-telling to preachy-educating, I'm lost.  Annoyed and lost.

There are many elements that could have been captivating - how Carlebach's sense of mission led him into strained relationships with his family, his need to compromise how he had previously understood the practice of his faith in order to reach out to a new generation, the borderline sexual tension between he and Nina Simone, and more.  Any of those could have pointed to a larger theme.  Instead they were presented as bullet points in a live-action lecture.  It never gave me any connection to an emotional inlet.

The one truly emotional reaction I had was to Amber Iman in the role of Nina Simone.  Iman was simply captivating.  Though her role was far too cursory for my desires, her skills as an actor and a singer had her holding the audience in the palm of her hands with the velvety-firm grip of a Cicely Tyson.  Time and again I found myself wishing Soul Doctor was staring Ms. Iman in a show about Nina Simone, with the role of Schlomo Carlebach as the interesting aside that pointed to the larger theme.

From the perspective of this 30-something priest trying to set the world on fire, I was sympathetic to the experience of Carlebach and his story of facing opposition while trying to do a new thing to take the mission to which he had been called into new territories and to reach new people.  That's exactly the kind of thing that I try to do in my own vocation, and I get what it's like to face opposition in that.  It can be soul-defeating and painful.  As such, I was glad to have encountered the story, even though it failed to meet the standards I expect from a Broadway production.

The creative aspects of the production were well-designed.  The set design by Neil Patel was simple, and well-utilized by Wise's staging.  The lighting design by the ever-effective Jeff Croiter (such successes as Newsies and Peter and the Starcatcher) was subtle and evocative.

On the whole, the production was not a total failure.  There were funny moments.  The music was pretty good.  But something was left missing.

I wouldn't expect this show to run very long, but I do expect it to go on to a long life being revived as high school musicals in Jewish private schools and community centers all across the country for a long time to come.  Sadly, however, it will never have the impact of bringing the story of Schlomo Carlebach to the masses.  I just can't imagine that that's in the cards.