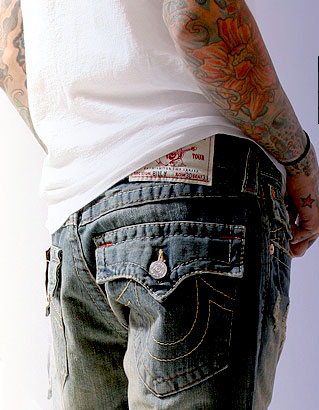 Periodically throughout the church year, there are a few Sundays that sort of stand out because of the collects we say.  Particularly in this “ordinary” time through the summer and into the fall, when we don’t have the larger arch of the major seasons of the church to capture our attention, the collects seem to direct us to a particular theme.

Perhaps it’s because many of them are now so old, that even in their contemporary language settings, the phrasing can sometimes stand out to us.

“Lord of all power and might, the author and giver of all good things… increase in us true religion…”

What exactly is “true religion”?

Well, you may or may not be aware, but if you were to ask most young people walking the streets these days, they’re just as likely (if not more likely) to tell you that True Religion is a brand of high fashion blue jeans.

It’s true.  For about two to three hundred dollars, you, too, can own a piece of True Religion - which would mean you’re at the height of fashion.  Though, of course, it would be pretty unlikely that I could ever be the priest of a church that meant that by “true religion”.  I’ve never been accused of being particularly fashion-conscious.

So, what do we mean when we ask God to “increase in us true religion”?

You’re likely to hear a very different explanation of it from me than you might from a rural, Southern Baptist preacher.

As such, it’s one of those terms that can make me a bit nervous.  Too often we define “true religion” as that particular brand of religion that makes us most comfortable - that feeds our own presuppositions - that reinforces our established opinions.

That may be a window into our true selves, but it’s not always “true religion”.

Earlier this week, I was reading an interview with LillianDaniel, the author of a book called When “Spiritual but Not Religious” Is Not Enough.  Without using those particular words, Daniel talks about “true religion” and how, if left to our own devises, we often miss that mark.

Using herself as an example, she says, “If I could make up my own individualized religion, God would let me make my weekly offering at the shoe department at Nordstrom.  And the closest thing to an admonition would be a gentle nudge to lose the five pounds after Thanksgiving I already wanted to lose anyway.  I like that religion but it’s not going to do anything to change me or the world.”

With that, I think, she starts to get at a biblical understanding of what “true religion” actually is.  It’s not about us.  It’s not about meeting our own needs, or catering to our own desires.  It’s about shifting our perspective to something outside of ourselves and our own self-interests.

It would be easy to hear Jesus’ parables from the gospel lesson today as little more than tips and tricks for better living and upward mobility.  Don’t assume the place of honor, because you might get pushed down to a lower rung, which would be embarrassing.  Instead, assume a humble place, and perhaps get invited up.

But it’s about more than just that.

In both of the parables Jesus told - about when you’re the guest and when you’re the host - the message isn’t just about getting ahead.  It’s about shifting your focus to those who are usually overlooked, ignored, or abused.

When you’re a guest, don’t just focus on the places of honor, but turn toward the other end of the table.  See the people and places that most people would rather avoid.  Embrace them.

And when you’re a host, don’t just invite the people who can do the most for you, but make it an occasion of doing something for someone else who has need - not just someone who has power.

God doesn’t want us to just think of ourselves.  God needs us to think of others, to care for others, and to turn our attention to those who are most in need among us.

I think that’s what the collect means by “true religion”.  That’s what we pray to have increased among us.

“True religion” isn’t just a self-indulgent pair of blue jeans, or a weekly offering at Nordstrom.  It’s not even your weekly “pick me up” at church to fuel you for the week ahead.

“True religion” is about a discipline of sacrifice.  It’s about a mindset of consciousness.  It’s a heart that beats for mission and service.

May it increase in us.  Amen.
Good Shepherd; Philadelphia