Believing your own press releases 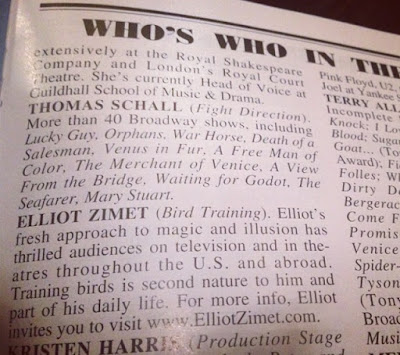 One of the pearls of wisdom that I hold as most-prized from my mentor to the priesthood is from one day when she warned me: don’t start believing your own press releases – and be warry of those who do.

I thought of that bit of wisdom I’d held onto all these years a few weeks ago when Michael and I went into the city to see a show.  I usually don’t like to read my Playbill until at least intermission, because I don’t want it to give anything away for me.  But by the time intermission came, I was feeling very bothered by the leading man.  Something – and I couldn’t quite put my finger on what it was – felt wrong for me.  I just didn’t like him, and you’re supposed to like the leading man.

Curious, I turned to my Playbill.  I found his bio, and I could see it right there.  He was a man who believed his own press releases.  His bio began: “He is stoked to be making his Broadway debut!  He burst onto the scene in 2009 and since then, has become a global phenomenon.”

The thing is, if you have to describe yourself as a “global phenomenon” it’s almost certain that you’re not one.  But even though he was an actor, that true, underlying part of himself invaded the character he was portraying – and that truer part of himself was one incapable of humility.  His portrayal made it hard to feel sympathy for the character.

The Parable of the Prodigal Son is the story of a man who started out believing his own press releases.  He started out believing that he knew more than his father, and that he could achieve greatness on his own, where his father was holding him back.  Through the course of living his life, however, the truth came out.  His father’s restraints were actually what kept him going.  Eventually, his situation became so dire that he had to face the facts of his situation.  His self-congratulatory confidence was misplaced.  He did actually need others.  He would have to humble himself and return to his father if he were to survive.

If you’ve heard the story before, you know how it goes: he did humble himself.  And he did return home.  He had learned his lesson and was prepared to pay the cost.  And his father welcomed him home with open arms.  He didn’t treat him as a servant, but as a lost son, returned.  His grace toward his son was more powerful than his son’s failures.

I’m always a little bit surprised when I use Rite I, to learn how many people are spiritually fed by that prayer we say just before receiving communion, the “Prayer of Humble Access”.  It’s the prayer that begins, “We do not presume to come to this thy Table, O merciful Lord, trusting in our own righteousness, but in thy manifold and great mercies.  We are not worthy so much as to gather up the crumbs under thy Table.  But thou art the same Lord whose property is always to have mercy…”  Whenever I’ve proposed using the prayers of Rite I in a congregation, usually one of the first things I hear is, “Can we use the Prayer of Humble Access”?

There is something soul-feeding for many of us that comes from remembering that we need God’s mercy.  We’re called to do a lot – we’re called to care for others and to live our lives to the glory of God.  But no matter what, what really brings us closer to God is not what all we do, but what all God does for us.  It’s not our actions, but God’s mercy.  There’s something comforting about remembering that try-as-we-might, we can fail and still be loved.

There’s nothing wrong with puffing yourself up from time to time.  The world doesn’t always come at us with mercy the way God does.  But at our core, it’s not our puffing-up that matters most, but our ability to be humble enough to ask for love and to receive mercy from one with no obligation to give it.

Easter comes as unexpected grace.  The women who approached the tomb that morning weren’t looking for resurrection.  They were looking to do the work that needed to be done.  But instead, they got the grace and the mercy they didn’t even know to be possible.  Instead of work, they got love.  Instead of mourning, they found joy.

When we find a way to humbly present ourselves before God – to push aside the puffing-up that the world demands – that’s when we’ll find that same grace.  That same love.  That same joy.  Thanks be to God.  Amen.
St. David's; Kinnelon