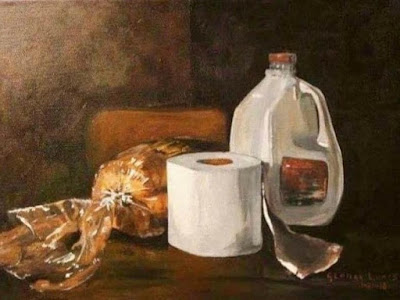 Last week, we began our Advent observances by worshiping, and talking about preparing for Christ in the world.  As I look back on that, it strikes me that it was sort of fitting that on the first Sunday of Advent – the first Sunday of the church year and the first Sunday of our exploration of the spiritual exercise of preparation – on that very same day, we should be prepping for our first snow storm of the season.

After church Michael and I made our obligatory trip to the supermarket.  We had procured some provisions the day before, but there’s something about the cold weather turning foul that sends us to grocery stores – perhaps even beyond our ability to control or reason.  By the time it was all said and done, between our two shopping trips, Michael and I were basically ready to be snowed in and unable to leave the house for at least a week.  It was almost an animalistic instinct to prepare – like squirrels storing away nuts for the winter.  And so we did.

In our first winter here, we lost power at the Rectory for a little over 24 hours during one of these storms, and since then, Michael has accused me of being one of those “preppers” that you read about in rural compounds out west – storing up supplies as if for an apocalypse of some sort.  I’ve purchased a camp stove.  Lanterns.  A battery powered radio.  And there are oil lamps placed strategically throughout the house.  I’ve even got my eye on an indoor-rated propane heater, that I’ll get one of these days.

The challenge is, we’re preparing for the unknown.  We’ve heard stories about how the power was out here for a long time after Hurricane Sandy, and neither of us knows how to handle that sort of thing.  So in preparing, I’m trying to cover every eventuality.  And, of course, I can’t.  We don’t know what the next storm will bring.  We can’t know.

John the Baptist was in sort of the same boat.  Preparing the way of the Lord, when he couldn’t have begun to understand what that meant.  And he was crying out to others, calling them to prepare, when they probably understood even less.  But he knew that they all needed to prepare.  And the best way he could imagine getting ready for this unimaginable future, was to do things differently – to change their ways – in other words, to repent.

Throughout the story of our faith, the idea of trying to prepare ourselves for the presence of God has sort of eluded us.  In Isaiah, the prophet tries to prepare the people of God by telling them that the world will be turned upside down – that peace that passes understanding will become the reality.  “The wolf shall live with the lamb, the leopard shall lie down with the kid, the calf and the lion and the fatling together…” and on and on.  Every point of friction that you can imagine will become an opportunity to witness love and peace.  Preparing for the reign of God among us is preparing ourselves to see the world in a completely new way.

And I think there’s some wisdom in that.  Among our most basic inclinations is to group together among ourselves – to seek out those who are like us, and to band together, and to protect our own.  If we’re lambs, we don’t go out seeking wolves.  Our inclination is to fear that which is different.

But the prophet tells us that God is reaching out into the world in a new way.  This line about a “shoot coming forth from the stump of Jesse” probably doesn’t mean much to us.  But Jesse was the father of King David.  At this time, the people of the faith had been cut off from the line of rule and protection that had come under the Davidic line.  They must have wondered if their covenant with God was still intact.  To say that a “shoot” was coming forth from that stump meant that God was still reaching out.  The path to God that we knew may have been cut down, but even so, God was reaching out, and growing, and coming to bring us back into covenant.  In the Christian faith, we see that shoot coming forth as the coming of Christ.  The new reaching-out of God wasn’t what the prophet or the people of Israel had imagined.  But it did change the way we saw the world.  It did turn things around.

And that’s what John the Baptist knew – amidst all the uncertainty of what God among us might actually be like, he knew that at the very least, we’d have to turn around.  We’d have to see things differently.

For us, the “wilderness” like John faced is the absence of faith all around us.  It was easy to be the church in the world when church was the default.  It was easy to carve out the time to worship on Sunday when everyone else was doing the same thing.  But today we are in the wilderness.  We are the “voice of the one(s) crying out in the wilderness.”  We are the ones looking at the world in a different way from everyone around us, and we are the ones who can call them to see this way that we’ve found.

Like preparing for some uncharted and unknowable storm, we can’t know exactly what we have to do to be ready to welcome Christ into the world.  We can only know that something’s gotta change.  Something has got to be different about how we see the world.

And that’s what repentance is about.  It’s less about bemoaning your sinful ways than it is about turning around – learning to see the world in a new way, and from a new perspective.  It’s about recognizing that the old ways were holding you back from engaging with Christ as deeply as you can, and committing to opening new doors.

That’s how we’re called to prepare for Christ this Advent.  By turning around.  By seeing what we’ve been missing.  Maybe God was there all along.  Amen.
St. David's; Kinnelon