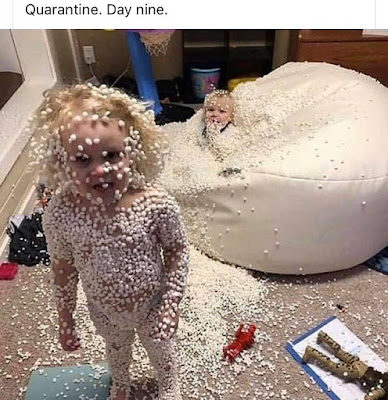 
In the name of the God of wisdom and strength, beyond our imagining.  Amen.

As a lot of people have been trying to make sense of this experience of working remotely – an experience that’s new for a lot of us.  And one of the ways that people have been exploring this new reality has been playing a bit of a game that’s been running around Facebook for a few days.  The game is simple: talk about the young children or pets in your home as if they are your co-workers, and we’ll all imagine how HR would respond to your complaint.

I saw one post that said, “My coworker just chewed up my headphones so now I can’t listen to music.”

Another said, “My coworker asked for carrots, so I gave her carrots.  Now she won’t stop crying because she hates carrots.”

I never did post it online, but mine would be something like: “My coworkers scream and cry whenever I leave the room.  They’re so needy!”

But it has been sort of funny to imagine how our dogs are reacting to this.  Michael and I love to speak for them, since they can’t speak for themselves.  The other day, I imagined one of them saying, “Daddy, I’m so glad it’s always Saturday now!”.  Michael thought about how we must be interrupting their routine, and suggested that our Chihuahua might be ready for us to go back to our offices.  At the very least, he must be feeling sleep deprived with us home so much!

But there is something sort of comforting about the ways that young children and pets don’t really get everything that’s happening in the world around us.  They don’t understand the troubling news.  They may sense our worry, if we’re worrying, but they don’t, on their own, know why we’re worrying.  They’re just going about their lives.

As I was reading this story about the healing of the blind man this week, I imagined the religious leaders in the time of Jesus being sort of that way.  The world was changing around them, but they didn’t really understand it.  People’s perspectives were shifting, but they kept trying to go about their daily lives as if nothing was happening.

Right now, for a lot of us, the world feels like it’s falling apart – at least somewhat.  We, like those religious leaders of so long ago, have ordered our lives around not just our faith, but our understandings of the ways that the world is meant to work.  We had come to expect being able to find whatever we wanted on the store shelves.  We had come to expect being able to shake hands and to hug and to worship together in one room, and to feast on Sundays on the Body of Christ – both in bread, and in the relationships we share with each other.

It’s a shift.  And it’s not even the kind of forever shift that the religious leaders of Jesus’ time had to make sense of.  It’s just a little shift for a little while.

Of course the other side of seeing our dogs’ reactions to our new, for-now patterns, is that sometimes, their worry is unfounded.  When a squirrel wanders by the window, they may panic, but we’re not really being invaded.  We’ll be just fine.  When they cry because Michael or I have left the room, they don’t realize that it’s only for a time, and that we’ll be together again soon.

Right now, while we’re worrying and missing one another – I like to imagine that God is thinking about us the way I think about the dogs’ outsized reactions.  I love them, but I know more than they can understand right now.  And I know that they’re going to be okay.  And God knows that we’re going to be okay.

Maybe God is looking at us right now with the same love and greater understanding.  Things are uncomfortable.  Life feels a little uneasy.  But when we focus on only right now, we’re blind to the bigger picture.

That doesn’t mean we shouldn’t be careful.  That doesn’t mean we shouldn’t disrupt our lives right now, because smart people have told us that it’s for the greater good.  It just means that we don’t yet know the whole picture.  Soon we’ll see more.  Soon we’ll all be back together in the same room again.  Too long, sure, but soon.  Soon and very soon.  Amen.
St. David's; Kinnelon