Coming together in a time of isolation 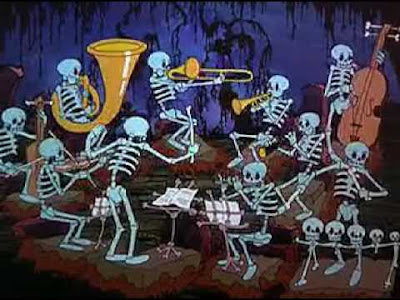 In the name of God: who brings us together.  Amen.

I remember as a child watching Disney cartoon shorts.  I watched the feature films too –though it seems like there weren’t as many of those then as there are now.  But even so, there was a huge library of short films – some featuring some of the major characters of the Disney world, but many with their own, distinct characters that didn’t appear much of anywhere else.

One of those short films, in particular, always ran through my mind whenever I heard this lesson from the Hebrew Bible that we read today – you may remember it: “The Skeleton Dance”.  The original version in black and white was released in 1929, but the one I remember watching was the color version that was released a few years later, in 1937.

They were both a part of this series of short animated films called the “Silly Symphonies”.  We had VHS tapes of those when I was a child and I would watch them over and over again.

And if you ever wondered if children really do pay attention during church, let this be an example to you.  I distinctly remember sitting in church with my mother, hearing this story read, and seeing the animation of “The Skeleton Dance” playing in my mind as I heard the story.  It’s such a clear memory for me, that this week, when I read through this story again, I started hearing the music playing and had visions of those goofy, bendy skeletons dancing around all over again.

But my mind had always stopped there – at the bones.  We hear the old spiritual call out, “Ezekiel cried, ‘dem dry bones!’”  It’s such a fantastical vision that it’s hard to get past it.

But if you listen to the story, it doesn’t stop at the bones.  God bids Ezekiel to prophesy, and with that prophesy, the bones come together.  But more than that, they come together, and they get sinews to hold them together, and flesh covers over them, and even skin.  But then that’s not enough.  He prophesies again and the bones are given breath – the four winds join together and these once dry bones are infused with life.

And then, at the end of the vision, God gives Ezekiel the key to its meaning.  God tells Ezekiel that the bones represent the people of Israel – scattered and disjointed, lost and afraid.  They say, “Our bones are dried up, and our hope is lost; we are cut off completely.”

You see, this vision came to Ezekiel in the time of exile – when Jerusalem had been destroyed, when they had been cut off from worshiping with their community and in God’s temple – a time in the life of that people when they felt most isolated from each other and from God.

Can you think of any better lesson for the church to have given us today, in the midst of “distancing” and pandemic?

So God tells Ezekiel to give the people a word of hope.  To prophesy to them.  To speak God’s peace and wisdom.  And that wisdom is that God hasn’t forgotten them.  God says, “I will bring you back…  I will put my spirit within you, and you shall live.”  I will put you back where you belong, God says, “then you shall know that I, the Lord, have spoken and will act.”

We’re living in a strange time, when so much of the world is consumed with ideas of sickness and death.  I pray that we’ll all be spared, but even as death does close in around us – as it does for all of us eventually – remember the Easter message that is bubbling up even now, even as Lent continues as the dominant story of our community.  Remember that God is the God of life.  We hear it over and over again.  We hear it in God sending good news to the whole house of Israel through Ezekiel’s prophesy.  We hear it in the promises of Paul’s letter to the Romans – promising that if Christ is in you, though the body may die, the Spirit is always life.  We hear it in the story of Lazarus – that first behind the scenes glimpse that Christ shows us, that God is stronger than death.  And that Christ’s love for God’s people is strong enough to speak and to act.

You’ve probably heard people say, “we’re still at the beginning of all of this.”  We know that’s true – the story isn’t over.  God is still speaking.  Amen.
St. David's; Kinnelon