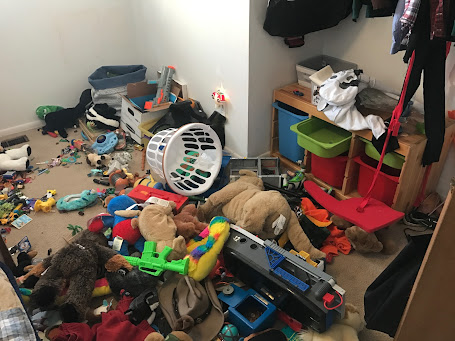 In the name of God who is guiding us.  Amen.

When we were children, my brother and I were never good at keeping our rooms clean.  This was a never-ending source of angst for my mother.  Toys and clothes were constantly strewn everywhere.  Sometimes there would only be a path leading between the door and the bed.  Invariably, after such a condition had been going on a for a while, my mother would become exasperated and threaten that if we didn’t clean our rooms, she would clean them for us.  And if she did it, “we wouldn’t be happy with the result.”

One of the things you have to understand about the Richardson household when I was growing up, is that we used language as both weapon and shield.  We were trained to be precise in our language, and if we didn’t literally say what we meant, then we should be prepared to take whatever we said – and that went for both parents and children.  So, in that kind of environment, thinly veiled threats were no threats at all.  What, exactly, would it mean that we wouldn’t be happy with the result?

So the threat was made plain: if Mom cleaned our rooms, she would put everything on the floor into plastic bags and donate it to Goodwill.  Sometimes the threat worked, and sometimes it didn’t.  There’s even an apocryphal story from my childhood that one year she followed through on the threat, but rather than donating everything, she just wrapped it all and gave it to us as Christmas gifts that year.  Honestly, I don’t even remember if that’s true, which probably means it isn’t, but that’s one of the stories that has endured.

But the underlying message of that threat was simple: if you don’t take care of what you’ve got, you’re going to lose it.  And that’s basically the message Jesus shares as the punchline to this parable: “the kingdom of God will be taken away from you and given to a people that produces the fruit of the kingdom.”  If you don’t take care of it, I’ll give it to someone who will appreciate it!

While it sounds like a harsh lesson, it’s an important lesson to hear – particularly as we, as a congregation, are engaged in one of our annual Stewardship drives.  This is a time when we’re thinking about what it means to take care of this little glimpse of God’s vision that we’ve been given custody over for these few years that we’re here.  What are the fruits of that vision that we’re producing?  How is God’s idea being realized, here in Kinnelon and in our surrounding communities, on our watch?  How are we helping God’s idea to be realized around the world?  It’s all on our watch, right now.

In this, Jesus is like a mother who just wants to instill the best values in her sons in the years she has them.  Jesus wants us to use what’s been given to us – not to squander it or to let it fall into disrepair.

For the past few weeks, and for the next few weeks, after Communion we’re saying that familiar prayer attributed to St. Francis: “Lord, make us instruments of your peace…”  We’ll say it again later today.

We use this prayer each year during our observance of a period of time to specifically express gratitude to God for the gifts of creation.  But it’s worth internalizing this vision for God’s guidance for us.

As you consider your own role in the Stewardship of this ministry we share – the ways that you will commit to taking part in caring for the ministry and helping it to thrive – think of these things as examples of the “fruits of the kingdom”.

In can sound convicting.  This parable and the lesson that’s laid out for us at the end can be hard to hear.  “The parable of the wicked tenants”, as it’s called, isn’t one of those that leaves us feeling light and breezy.  But the words of Jesus should always be interpreted through love.  Just as lives lived for Jesus should always be lived through love.  That doesn’t mean the message is always easy.  God knows love isn’t always easy.  It doesn’t mean we only ever sit around with beatific faces singing “Kum bah ya”.  Sometimes the message isn’t so fun.  Just like sometimes cleaning your room isn’t fun.  But it’s about growing into the best we can be.  And the best we can be is love.  Amen.