Loving in the middle 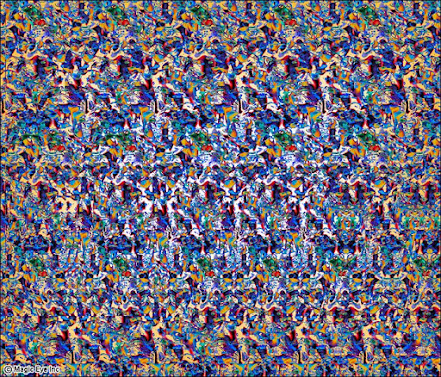 In the name of Love.  Amen.

The gospel lesson today is like one of those magic eye posters that was popular about 20 years ago, or so.  Where you would stare at a nonsensical image until a picture appeared.  Hear me out…  Or maybe like – have you ever seen those contests that PBS used to do on their website, where they’d show some extreme close up with macro-photography, and from there you’re supposed to guess what the item in question actually is?  Like – maybe it looks like a snowy tundra in Antarctica, but when the image is brought into focus from farther away, you realize it’s a camel in the Sahara.

That’s how I encountered the gospel today.  It may not be as popular as John 3:16 is in the world, but among those of us who count ourselves as Christians, and who try to study the Bible and the teachings of Jesus, it’s one of those few verses that even Episcopalians can probably quote.

What is the greatest commandment?  It is to love the Lord your God with all your heart, and soul, and mind.  And the second is like it.  To love your neighbor as yourself.  It would be hard to spend almost any time as a part of almost any church and not have those words drilled into you eventually.

And they’re good words!  So much of the Bible seems hard to wrap our minds around, or written in such circuitous riddles that we could spend a lifetime unravelling them.  Or things that, if and when we do actually get it, are hard to hear and even harder to commit ourselves to.  But this one sticks.  It’s easy to understand and it’s reasonable to expect of ourselves – or at least it’s reasonable to strive toward.  Love the Lord your God with all you hear, and soul, and mind; and love your neighbor as yourself.  We can all get on board with that.

But one of the fun things about preaching is encountering these words over and over again, and praying for how God might be speaking to a particular community through them, and trying to find those words and that message to share with the community.  It’s like unwrapping a gift every Sunday.  Well, on the good weeks.  Sometimes it feels a bit more like dismantling a bomb…  But I digress.  This week it felt like unwrapping a gift.

But the surprising thing that I found this week when I tore into this familiar paper is from the story’s context.  If you were to open your Bible and look around at the kinds of things that are happening in the story before and after, you’ll notice that Matthew’s account of this story puts us right in the middle of Holy Week.  The Matthean account sees that period of Holy Week as being exceedingly busy for Jesus – a lot of his parables and teachings happen there.  For Matthew, Palm Sunday is told in the 21st chapter, and all that surrounds the crucifixion begins in the 26th chapter.  What we read today was from chapter 22.

If you’re like me, when you start hearing these numbers and citations your eyes start to glaze over and you mind turns to shopping lists, or emails that need to be responded to, or something like that.  But in this grand scheme of things, it becomes pretty important.  It’s there – right between the jubilation of Palm Sunday, where he was greeted with adoring fans, and Good Friday, when the crowds shouted “Crucify him!” – that’s where he proclaimed the message of the faith: that we are called to love God with all of our hearts, and souls, and minds, and to love our neighbors as ourselves.

There’s a real correlation to where we are in this pandemic right now.  I don’t know a single person who isn’t “over it” – who doesn’t just wish we could put this chapter behind us and move on back to all the things we had before, and to move back into the sense of security we enjoyed before.  But that’s not where we are right now.  We’re in the uncomfortable middle.  We’re in that gray time between the highs and lows, still just trying to make our way in the midst of something we really don’t understand.

And the message Jesus has for us now is not just to love the Lord our God with all of our heart and soul and mind, and to love our neighbors as ourselves – it’s to do that now.  Even now.  In the midst of the confusion, and in the midst of the uncertainty.  Now is the time to love God and each other.  Now, when we feel pressure.  Now when we can’t wrap our minds around all that is to come.  Now is the time to love like Jesus.  Amen.