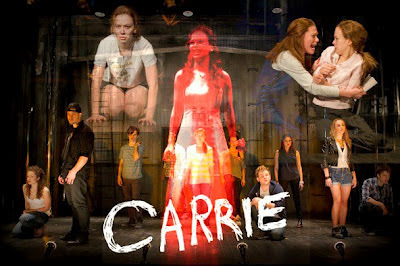 Synopsis: The latest musical retelling of the 1976 Stephen King horror film of the same name.  Carrie is an outcast of a high school student who discovers her special powers and uses them to exact revenge on her persecutors the night of the prom.

My thoughts: Carrie is something of a legend in the theater world.  The lavishly expensive original production in 1988 was officially open only three nights.  It wasn't for lack of sales - the show sold out - but it was for the embarrassment lumped upon the production team.  The curtain calls each night were mixed with cheers and boos.

Obviously, I never saw that original production, but I wasn't going to let this latest (and, to date, only)
revival slip by.  But I understand that some major revisions were made to the show from the last time it was produced.

Even so, it's hard for me to imagine why it was met with such scorn those years ago.  Part of me wonders if it typifies the "ahead of its time" designation.

Carrie is a brilliant show - and despite being a revival, and based on a 36 year old movie, it remains incredibly timely.

Earlier in the day, while making a pastoral visit, I was sitting in a hospital waiting room and watching the guilty verdicts being announced for Dharun Ravi - the former Rutgers University student who gained national attention in his bullying episode that led to the suicide of Tyler Clementi.  Clementi had been harassed and publicly humiliated for being gay.  As a gay man who survived occasional harassment and bullying in high school, I found myself strangely compassionate toward Carrie.  I understood a measure of the pain her character must have felt.

Moreover, we're constantly hearing about the latest "war on women" in our national political life.  Carrie was raised in a hyper-conservative, self-loathing household based on skewed Christian ethics and ideals.  Her mother begged her to pray for her "sinful" status as a woman.  Her life was characterized as a shameful (and shame-filled) iteration of the "curse of Eve".  She was taught that her existence was loathsome and worthy of shame.

So while I understand that the word "Carrie" has become something of a laugh-line - both in the theater world and in wider popular culture as a result of the film - the message today is important.  Our social policies and thinking and teaching have consequences.  Hateful thinking leads to tragedy.  Though it's expressed in supernatural hyperbole in the story of Carrie, the real-life tragedies that grow out of dehumanizing hate remain very real.

The production itself was stellar.  The music is engaging and "hummable".  Though it's not often the case in off-Broadway productions, I do hope a cast recording is produced.  There isn't an official cast recording of the 1988 production (only bootlegs exist), but this production is very different anyway.

Throughout most of the show, Sven Ortel's projection designs were characteristically subtle and effective.  They delicately told the story and nearly went unnoticed throughout the show.  The only major exception to this would be in the final scene when projections were relied on quite heavily to execute the carnage of the prom.  But even in that scene, it was executed only as much as was needed - not overdone at all.  My only criticism would be in a scene where the "cool" high school students are gathered - presumably in one of their bedrooms.  Ortel was attempting to build a high school student's bedroom, and chose to project a collage of posters as might be found in a teenager's room.  For some reason, this collage approach seems to be popular in the world of projection design.  It was used in the "beauty shop" scene of Bonnie & Clyde, and was similarly ineffective there.  It actually comes across as sort of lazy - which Mr. Ortel clearly is not!  Aside from that scene, however, his work was as refined as I've come to expect.

Lighting design, by Kevin Adams, was excellent.  There was consistently clever use of color.  He carried us through the pastels of the surface of high school life, while always reminding us of the darker and sharper underbelly that waits around every corner.  Particularly effective was his use of silhouette and side lighting in a few scenes.  Adams clearly understood the story in a deep way and shared that understanding with each of us through his work.

Another bright spot in the production was the choreography by Matt Williams.  It was angular and kind of an urban vogue style.  It really fit (and helped to establish) the point of view for the production as a whole.

The standout performer was clearly Molly Ranson in the role of Carrie White.  She was magnificent!  As an actor, she brilliantly portrayed Carrie's shy, tormented, and beaten-down personality - but tinged with a secret - a power - that would only later be revealed.  As a singer, she was strong and beautiful.  Throughout the performance I repeatedly found myself thinking that I was seeing something like audiences must have seen when witnessing the young, emerging talent of Sutton Foster.

Mark my words, friends, Molly Ranson is one to watch!