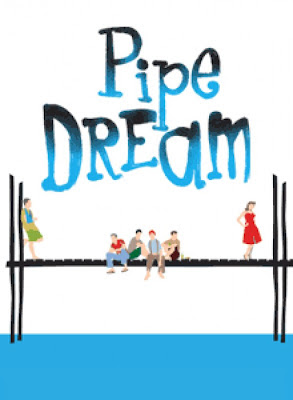 Synopsis: Hmmm...  Well, I guess it's the story of the leading man and the leading lady finding love together.  But there really isn't much in the way of story.  A better synopsis might be: a fluffy Broadway musical.  It's only really about itself.

My thoughts:  I really don't have a lot in the way of thoughts - mostly because it was a staged reading and not a full production.  But in reality, it did have much more in the way of production quality than one might typically expect from a staged reading.  The set, though minimal, was more designed than previous Encores! presentations I've seen or than I would expect from a production of this type.  There was corrugated sheet metal and old signs along the wings.  The orchestra was perched atop a pier-type structure - representing the seaside motif of the story's setting.  A couple of set articles - not much more than substantial props - came on and off the stage as needed.  But in general, it was minimal.  The costumes were appropriate for story-telling, but not significant.  The lighting was actually quite a bit more designed than I might have expected, but still, not terribly extravagant.  The choreography, on the other hand, was nearly full-production quality.  It was excellent and perfectly appropriate to the style of the show.

In terms of the talent, it was a mixed bag.  Leslie Uggams had a strong presence, but her vocal abilities were often mixed.  Her strongest moment was in her reprise of "All at Once You Love Her".  Tom Wopat was, predictably, disappointing, both in terms of his singing and acting.  It was a delight to get to hear Laura Osnes again.  Her voice really has a lovely and affectionate tone.

The real performing stars were to be found in the ensemble - always a treat!  The greatest among them was Matthew Bauman.  His stage presence is eye catching - bordering on too much so for an ensemble - but a delight to see, nonetheless.  When I was able to peel my eyes away from him, it was usually at the demand of the commanding vocal abilities of Nicholas Ward - a rare and beautiful bass voice.  Too often bass soloists come across as strained or imprecise.  Ward, however, made it sound easy.  He was truly thrilling, though too rarely on display.

One can easily see why Pipe Dream is not one of Rodgers and Hammerstein's most popular shows.  It has virtually no discernable plotline, and while the music is often lovely, it doesn't produce much in the way of a takeaway.  It's purely fluff, but that's not necessarily always a bad thing.  Sometimes we just love a good silly musical.  And this show certainly qualifies.  But it is a sweet piece and certainly worth the time in seeing (though many of my fellow audience-mates didn't seem to agree - the house emptied noticably at intermission).

I will say, however, that I really do love the concept of the Encores! series.  They produce high-quality, professional, short runs of staged readings of musicals that aren't often revived.  They are doing a great service in keeping the canon of musical theater literature at the foreground of the audience's mind.  I look forward to seeing many more of their shows in the years to come!