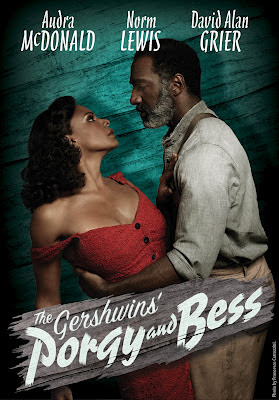 Synopsis: Porgy is a man crippled since birth.  Bess is a party-girl living the fast life.  When she encounters troubles with her man, Porgy steps in to offer help when no one else will.  The two fall in love, but Bess' past continues to haunt her.  Don't let the title fool you, however.  The real relationships at the center of the story, in my opinion, are not between Porgy and Bess, but between all of the residents of Catfish Row.  The community is the main character - not really any individual.

My thoughts: Early in the course of my formal music study, I remember having my thinking on the subject blown open by a music theory professor who described music as "ordered sound and silence."  It was the silence that I'd never before considered.  But it made so much sense!  Sound would mean nothing without its contrasting counterpart - silence.  Moreover, without careful attention to silence - carefully placing it and using it, as might a painter or a poet in their mediums - the sound can quickly become meaningless dribble.

Emblematic of the brilliance of this production is its use of shadow.  Lighting design isn't just about what is illuminated, it's about what is left in the dark - literally and figuratively.  The evocative use of shadow by designer Christopher Akerlind consistently amazed me.  Long shadows across the architectural features of the set in the opening song, "Summertime", convey not just the evening after a long, hot, southern day, but the whole "livin' is easy" mood.  The shadows off mourning funeral dancers stretch at least twenty feet up the back wall of the set, adding a depth of emotion playing across the stage.

The use of shadow speaks to the larger subtlety of the production as a whole.  The audience has to work for what it gets.  So many shows beat us in the head with the points they are trying to make, but Porgy and Bess gently places its many gifts in that space between and almost beyond the reach of both the actors and the audience.  Both have to stretch and strain to make the necessary connection.  While this approach may not be as easy as some other, more crowd pleasing devices, the connections it yields are deeper and more lasting.

Though a friend who works in lighting has helped to teach me how to watch for it, the lighting design isn't the only point of brilliance of this production.  The choreography, though never the focus, was powerful, but restrained.  Like the intentional and measured movements of people who are used to being held down.  The notable exceptions to the rule of restraint are in the few scenes where the gathered community gets to focus on itself: the mourning funeral dancing, and the picnic are both unrestrained and free.  Fleeting moments of freedom in restrained and carefully measured lives.

The set design is rag-tag and rarely changing.  It is made up of mismatched boards, peeling paint, and only sparse attempts at beauty and decoration.  In short, it tells the story of the people of Catfish Row - their cobbled-together existence, and their focus on survival instead of the luxuries most of us take for granted.

The performance itself was stellar - in the truest sense of the word with such a star-studded cast.  Audra McDonald certainly did not disappoint.  The TONY award does mean something, after all.  The four-time winner showed again tonight just how much she deserves all of the accolades she has earned.  Equal in stature was the performance of Norm Lewis - an actor unlike almost any other.  He sold the role of Porgy so completely that it was almost shocking to see him abandon his limp at the curtain call.  The break-away star was NaTasha Yvette Williams in the role of Mariah.  She was the matriarch of Catfish Row to the core of her being.  If one of the goals of the theater is to spur feeling (and I think it is), Williams proves herself integral in this production.

Sitting in the production, lured ever deeper into the world of Catfish Row by the beautiful music and it's masterful and passionate performance, I found myself feeling like I was in the midst of something really important.  Porgy and Bess, however, is not just important historically, or in terms of the writing or its current performance and its unmatched quality - no, this show is important in its execution - in that it is even being done.  Broadway is still mostly the "Great White Way" in some less-than-flattering ways.  The vast majority of both performers and audience members are white.  I haven't seen any studies to this effect (though I'm sure they've been done), but I have been in a lot of theaters, and I have looked around.  Porgy and Bess helps to open the doors a bit wider.  It takes seriously the stories of African Americans and the African American story as a whole.  Her people are not put on display, or exploited - they are celebrated and honored.  And the proof is in the pudding - the house at the Richard Rodgers Theatre was among the most diverse I've ever seen.  And I was honored to have been a part of it.