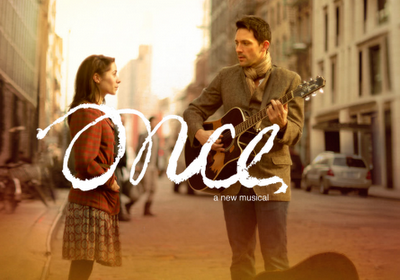 Synopsis: Guy and Girl meet.  They fall in love through a shared passion for music and appreciation of the others' talent, but both have relationship baggage.

My thoughts: After that REALLY long last post, you'll be glad to know that my thoughts this time will be much more succinct!

Once is described as an Irish folk-pop musical, and I can't think of a better way to describe it.  It's a stage adaptation of the recent film of the same name.  I had recently seen the film in preparation for seeing it live, and I wonder if that might not have been a mistake.  The film is much quieter, slower, and more subtle.  And while I realize it's necessary to present a stage show with a higher energy, I often wondered if it might have been a tad too much.

As I walked into the theater, there was pre-show music already being played on stage by members of the cast.  Additionally, there was a bar onstage and members of the audience were wandering up there to get drinks.  It was a clever way to establish the mood of the evening, if not a bit too rollicking to faithfully setup the mood of the piece as a whole.  Indeed, the pre-show time blended seamlessly with the show opening.  The house lights didn't fully dim until well into the first musical number.

The guiding principle for the show seems to be simplicity.  The set never changed, the costumes never changed (at least not dramatically), the lighting was simple, the choreography (if you could even call it that - it was really more just arranged, slow movement) was simple.  It was clearly a small production that made its way (perhaps unexpectedly) to Broadway.  In fact, I often found myself wishing that I'd seen it when it was still Off-Broadway.  The size of the Broadway theater costs us some of the intimacy that seems to have been built into the production - but that's not the fault of the actors or anyone else, it's simply a casualty of space.

A few of the changes between the live version and the film version stood out.  Most notably (in an unpleasant way) was the repeated attempt at comedy.  As I think I've said in a previous review - I'm generally unimpressed by attempts at comedy.  Perhaps it's just because I don't find funny the kinds of things that most people seem to find funny.  But regardless, the laugh lines usually felt like a stretch to me, and seemed contrived and unnecessary.  A more positive change, however, was that the characters of Baruska (Girl's mother) and Da (Guy's father) were more developed in this version than in the film.

There were really no standout performers - even the stars seemed to function more as leading members of the ensemble than as stars - with the possible exception of Will Connolly in the role of Andrej.  He had a very brief solo singing moment, that I prayed would go on and on.  Sadly, it didn't, but I hope to hear more from him soon!

In general, the show is very song-driven and not particularly plot-driven.  The reason to see the show is for the music, and that is certainly reason enough!  Reflecting as I was walking out of the theater, I realized that it's not that I didn't enjoy the show, it was just that it didn't make me feel.  There was lots of great music, but I never found myself lost in the world of the show.

Closing arguments:
Post-script:  I debated about whether or not to include this, because it really isn't about the show itself, but more about the experience of the show.  The ushers were repeatedly distracting throughout the show.  I was seated near the entrance to the box seating area, and one usher kept walking in and out of the curtain, exposing the bright lights of the hallway to all of us in the area.  Another usher reprimanded an audience member for using electronics at full-voice when the show was fully underway.  Another, still, stood near the end of my row - just feet from me - coughing through most of the second act.  I've chosen to mention this complaint because: 1) it was multiple ushers causing multiple disturbances, and 2) because it wasn't just disturbing me - I overheard some nearby seatmates discussing the same distraction at intermission.  I'll be writing to the management of the Jacobs Theatre to complain about the experience.  It's one thing to be distracted by another member of the audience - perhaps one who isn't very savvy about etiquette in the theater - but the ushers should know better.
From the Cheap Seats