FCS: Days of Wine and Roses 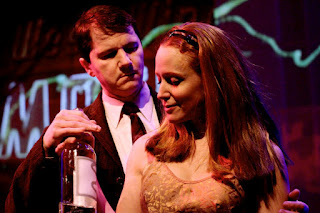 Know someone working the show? Yes.  My friend Shawn E. Boyle was the projection designer for the show.  Shawn had shown me some early projection concepts for the show and told me that he was getting into the show - so that's why I went to see it.

Synopsis: It's the tragic love story of two alcoholics.  One who struggles through recovery - one who refuses.

My thoughts: It was an intense and emotional show.  So much so that I kept finding myself having to consciously work through the feelings that I was having.  In the small venue, the huge emotions shared by the principle actors seemed to spill out and fill up every corner of the room we shared.  It was often uncomfortable.  Which, I would say, is a sign of success.  The story is difficult and uncomfortable.  I found myself thinking, from time to time, how difficult it must be for an actor to "play drunk".  And it must be all the more difficult in an intense drama such as this.  An actor might perilously slip into slapstick comedy in acting these parts, but Rich Orlow and Quinn Cassavale (in the leading roles of Joe and Kirsten Clay) masterfully handle this challenge maintaining the rich spectrum of emotions through which their characters lead us.

Weak moments in the performance were hard to find, but not entirely absent.

Early in Act I there were a couple of slow sound cues.  It dragged the pace a bit and stood out - most notably when a single actor was clapping on stage, waiting for the chorus of other clappers to come in through a recorded track.  We all thought they may never come!  But fortunately these cues seemed to be hit a bit more on target as the show continued.

The lighting, while generally acceptable, did have one very peculiar element.  The sides of the set were each lined with three tall columns.  Two columns on either side were outlined in blue lights that were used intermittently in various scenes.  These lights were entirely unnecessary and often distracting.  When in use, they were entirely too bright and pulled the eye away from the action in the center of the stage.  Also, they tended to occasionally flicker and slightly buzz when they were on, and always flickered distractingly when being turned on and off.  While they made sense in one scene in Act I when they were first used - at a party (or bar, perhaps?), their use never really seemed to make sense again.  It was if they were employed to justify the expense of having them.

The rest of the set, designed by Jason Bolen, was one of the highlights of the production.  Despite the confines of a small space, Mr. Bolen made use of multiple levels and three scrim panels to give dimension, flexibility, and variety to the set.  While it was a simple concept, it was, in itself, engaging and made space for elaborate staging and story-telling.  The three scrim panels allowed for occasional staging behind them - giving greater dimension to the various characters and perspectives represented in the story, but also provided a surface for projections - another of the highlights of the production.

While I know the projection designer, and have admired his work for a while now, I feel at least partially unbiased in recognizing that this was among his strongest achievements that I've seen.  The projections helped to add texture and character to the story without becoming the focus (even though I probably focused on them too much because of my friend...).  There were occasional animations and videos, but always tasteful and reserved - never pulling us away from the action, but always drawing us deeper into it.  A few elements that stood out for me particularly: first: the brick and plaster work in the AA meeting.  Perhaps it's because the set had so caught my eye as I was sitting in the house waiting for the show to begin, but it was nearly magical the way these panels seemed to transform into something more.  Similarly, in a later scene at the home of Kirsten's father, the panels became papered in an elegant damask with sconces on the side walls.  The texture and the change was captivating.  As the scene at the house progressed, Joe and Kirsten fell off the wagon, and the walls and the sconces shifted to an angle and took on a bluish tinge from their goldenrod original.  Admittedly, when I first saw this happening, I wondered if it might be overkill,  but it made more sense as the scene progressed.  Kirsten, by this point drunk, interacted with her sober father.  Over her father, the sconce and damask remained in their original color and form, but over the inebriated Kirsten, the tilt and blue prevailed.  So the projections helped to tell the story.  Another point that seemed clever was in the same scene - Joe was out looking for another bottle of alcohol that he'd hidden.  He was walking outside under the light of the moon ringed in clouds.  As he stumbled into his father-in-law's greenhouse, the moon and clouds remained in view, but through the framework of the greenhouse.  Clever!  The final projections aspect that I will mention - though there were many more! - is one that I don't know that I can entirely articulate, but appreciated nonetheless.  As part of the Clay family's descent, they had to move into a cheaper - presumably poorly appointed and dingy apartment.  Part of how Mr. Boyle conveyed this was through the black and white image looking down the shaft of an old, winding staircase.  I noticed, however, that as Joe moved into sobriety, the black and white image became a kind of sepia - clearly brighter and with more dimension, but still the same underlying reality as before.  It shifted again, however, when his wife, still bounded by alcoholism, returns to the apartment.  The sepia faded into its original black and white.  I wouldn't presume to speak for the designer, but this subtle shift did underline, for me, the emotional shifts within the scene.