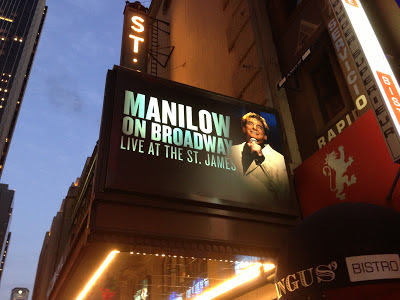 Synopsis: The 1970s pop star that keeps coming back for more, even all these years later, in a concert performance on Broadway.

My thoughts: "I was the Justin Bieber of the 70s.  Really.  Ask your mother."  So says Barry Manilow in this, his latest concert - now appearing on Broadway.

After all these years, one would expect that Barry Manilow, who later this year will be 70 years old, would begin showing his age, and in this concert, those expectations were met.  Manilow sang all of the old hits he's long been famous for, but he's clearly beginning to slow down.  His voice is still as ever there as it ever was, but he's moving a little slower, and he seems a little less sure on his feet - proving that there's only so much a face lift can do to convey youth and vigor.

I had seen Barry Manilow once before.  In 1995 my high school show choir was asked to sing back up for him in his Lafayette, Louisiana tour stop.  We got to see most of the show, since we were singing as a part of the encore.  After the show we got to meet with him, and somewhere there exists a picture of me and the choir with him, wherein his arm is draped around me.

In many ways, this concert was basically the same one I saw those 18 years ago.  The biggest change, however, was that this time Manilow interspersed his songs with stories of his life and career, and occasional commentary on the state of popular music today.  He almost couldn't help coming across as something of a curmudgeon. 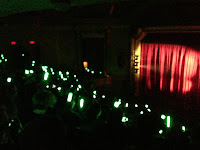 At one point he spoke of having made his career writing melodies.  He said, "Whatever happened to the melody?  Did you all see the Grammy's the other night?  I miss the melody.  Oh well.  I'll keep doing what I do."

The audience was decidedly older, as might have been expected for an event like this, so it was particularly strange to have glow sticks distributed to us as we entered.  I had to show several of the older women around me how to operate them.  So on the whole, it seemed less like an actual pop concert, and more like the memory of one revisited and re-staged.