FCS: The Mystery of Edwin Drood 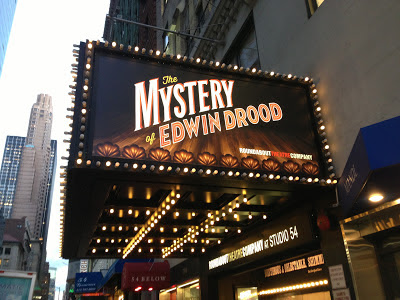 Synopsis: The unfinished Charles Dickens mystery brought to life on a Victorian era stage, where the audience chooses the ending.

My thoughts: First of all...  WOW.  It's been a long time since I've written one of these!  I've seen a few shows since my last review, but with all of the busy-ness involved in moving, and starting a new job, and figuring out a new life in a new city, I've let my writing slip!  I may end up getting to the three shows I've missed writing about, but they've all already closed...  I'm getting on this one, because I didn't want to make it four!

I went into this show, not really knowing what to expect.  I'd never seen it before, nor heard the cast recording.  I knew the bit about the audience choosing the ending, but really that was about all I knew.  I didn't know that it was semi-backstage.  I didn't know the cast would so consistently break the fourth wall.  I didn't even know it was a comedy.  Frankly, had I known more about it, I probably wouldn't have seen it.

But I'm pleased that I did.

Earlier this week, while watching an episode of Glee (dear Lord, forgive me...) the theater bug struck again.  I didn't really know what I wanted to see, but I knew I needed a Broadway musical fix, and fast.  While there are lots of great off-Broadway and other productions, I needed a strong dose of the Great White Way.

And The Mystery of Edwin Drood didn't disappoint!

It was big theater, big acting, big score, and big story all rolled into one.  A classic night at the the theater.

As I've written many times before, comedy isn't usually my thing.  Frankly, I find it tedious.  Usually what works as comedy doesn't work for me.  But this show was a clear exception.  The jokes were witty - at least enough to justify the occasional slapstick and crude humor!

The music of this show isn't really my favorite.  There weren't many numbers that got me excited, with the decided exception being "Don't Quit While You're Ahead".  I actually - literally - walked away whistling it.  It kept me entertained while I waited for my car after the show.  I even woke up this morning with it still stuck in my head.  But aside from that one delightfully catchy tune, there were no other memorable moments of the score for me.

Many members of the audience may have been disappointed because Chita Rivera was out last night.  I've seen her before in another production, so I know what a treasure she is, and I'm sure that she would have been remarkable, but even so, her understudy, Allison Cimmet, was a pure delight in the role.  She was so natural that it was hard to imagine if Ms. Rivera had been in.

Before the show began, members of the cast wandered about the theater interacting with the audience (cue the fourth wall!).  The character that came up and spoke with me as I waited in my seat was Mr. Jasper, played by the brilliant (and brilliantly handsome) Will Chase.  Perhaps it was just that early personal interaction, or the fact that he was one of the leading men, but I couldn't keep my eye off of him the rest of the night.  His performance had me in the palm of his hand.

Another standout in the cast was the young Nicholas Barasch playing Master Nick Cricker.  While he was a delight, he shone almost too brightly.  At times his magnetism was a distraction.

The standout member of the cast last night was Jim Norton, in the roles of the Chairman and Mr. William Cartwright.  He is clearly a brilliant actor.  His ability to shift between character with precision and clarity was a marvel to behold.  Equally precise was his command of comedy - a difficult art, to be sure.

The set design is very flat - composed mostly of drops and props.  But it is effective - both in portraying the era in which it is set, and in telling the story.

The lighting design was equally effective.  Most notably, I was drawn to the scene in the opium den, with the lovely painting of silvers and blues.

On the whole, the production reminded me a great deal of Peter and the Starcatcher, which I so loved last year.  The similarity was particularly in its pacing and witty execution of comedy, though the Victorian era setting also put the Peter... "steampunk" effect to mind (though this was not a "steampunk" show).