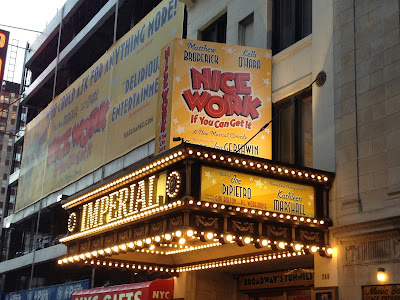 Synopsis: A good-timing playboy meets a beautiful bootlegger and they fall in love.

My thoughts: I've often said that a bad night at the theater is still better than most other nights.  Tonight, for the first time, I began to seriously question that position.  I've never come so close to leaving a show at intermission as I did tonight.  I didn't leave, mostly because I wanted to write about it, and it wouldn't seem fair to do so without seeing the whole thing.  But it was a pretty rough go making it through.

I went into this show - from the first time I heard about it - with an odd mix of apprehension and optimism.  On one hand, who doesn't love the music of Gershwin?  Beyond that, who doesn't love Matthew Broderick and Kelli O'Hara?  But on the other hand, do we really need another Crazy For You-esque, sappy love story set to the uber-familiar tunes of the Gershwins?

Turns out the answer is no.

The book, by Joe DiPietro, was overly predictable, and sadly, even if it wasn't, there wasn't much there worth the effort of predicting.  It failed to live up to the wit and whimsy of the Gershwin music and lyrics it was there to support.  The story slogged through on the back strained and vastly overused efforts at slapstick comedy.

Of the last Gershwin show I saw, Porgy and Bess, I wrote: "Probably the most important show I've seen this year - maybe longer."  Nice Work... is the polar opposite.  Thoroughly unimportant.  Of course not every show has to make a social statement, or advance the canon of the theater in some meaningful way, or anything like that.  But if it doesn't have those things, it ought to at least have something to offer other than a rehash of old music and a platform for stars.

The stars were, of course, a delight.  It was fun to see Kelli O'Hara and Matthew Broderick live.  Both of them were engaging in their musical performances.  But the show leans far too heavily on that star power, and fails to give them much with which to truly shine.

The one really shining experience, however, was the set design by Derek McLane.  It was beautiful and clever.  From the opening scene, when the interior of a prohibition era speakeasy folded in on itself from all sides - like an open flower regressing to its bud - to reveal the exterior of the building and the dock on which it sits, I knew I was in for a treat.  Each succeeding scene followed suit, revealing one grand and creative view after another.

Despite my deep disappointment, the audience around me (composed mostly of octogenarians) were thrilled with all that they saw and heard.  The applause was sincere and I heard more than one person comment that it was "spectacular" and "amazing".  I'm sorry I didn't get to share their view.

Nice Work... has already had a longer run than I might have predicted had I seen it earlier, but I'm sure the show is destined for an even longer life through a turn in lower market tour stops and following that, years of high school musicals.  It seems to have been written less for Broadway and more for that afterlife that is sure to come.