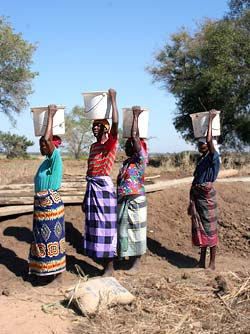 The Gospel lesson appointed for this morning picks up one verse too late.  The text this morning begins with the Pharisees warning Jesus that Herod wants to kill him, but we miss the context that would help to explain that.

In verse 30, just before where we started reading this morning, we hear that familiar line from Jesus about how “the last will be first, and the first will be last.”  By anyone’s account, Herod was clearly among the “firsts” of his generation, so it’s easy to see how he might have felt threatened by Jesus.

The Pharisees, probably in an effort to get Jesus out of their own way, warn Jesus that he should flee from Herod’s wrath.

In the field of behavioral psychology, we discuss one of the basic animal instincts: the fight or flight response.  When threatened, humans and animals assess the threat, and quickly decide whether to try to counter it, or to run from it.  But in the story that we read this morning, Jesus models another way.  When facing Herod’s threat, Jesus neither fights back nor runs away.  Instead, he responds with compassion: his desire to gather the children of Jerusalem “as a hen gathers her brood under her wings.”

For Jesus, feeling threatened is not an occasion for fighting back, but for drawing in.  When the first are last and the last are first, it’s not about excluding the well off, the powerful, the leaders.  It’s about extending that welcome to everyone else, too.

James Cone, a theologian at Columbia University, wrote a book called God of the Oppressed, in which he spoke about what he called God’s preferential option for the poor.  He points to moments throughout the Bible like this one - this last/first dynamic - as evidence that God is on the side of those who have been oppressed.  But I’m not so sure that’s what it’s about.

The radical shift that God makes is not in denying them anything, but extending those same options and courtesies to all of the others whom the world has always deemed unworthy.  It’s not about excluding anyone from anything, but about extending opportunities and grace and love to others that had previously been left out.

Bishop Michael Curry of the Diocese of North Carolina wrote: “the gospel transcends marginality and creates the context for the emergence of a new humanity, a new community, born not of social custom but of the spirit of God.”

In this new community, the social customs of privilege and poverty are eradicated.  The poor, in receiving blessings, take nothing from the privileged.  Privilege, on the other hand, always excludes the poor.

There is a degree to which we are all people of privilege.  I think I’ve always sort of known that, but nowhere was it clearer to me than when I traveled to Ghana several years ago.  Everywhere we went, we were surrounded by extreme poverty, and everything about us screamed privilege: from the air conditioned busses on which we rode, to the comfortable hotel beds in which we slept, to the abundance of the food that was available to us to eat, to the clothes we wore - even our personal hygiene habits.  As my mentor, the Rev. Elizabeth Kaeton often reminds me, “soap is a middle class value.”  This all stood out to me in Ghana because I wasn’t used to thinking of myself as particularly powerful or privileged.  As a seminary student who had been in school for most of his life, I certainly didn’t consider myself rich.  Financially, I was struggling.  But in a country where the average income was about $350 per year, I was wealthy.  I had brought far more money than that with me simply for souvenirs and gifts.  Seeing the world from that wider perspective had shown me an aspect of myself that I didn’t yet know.  For the first time, I could see my privilege glaring.

But the last/first dynamic isn’t just a tool to guilt us into seeing our privilege.  There’s a degree to which we are all ‘the last’, in some ways, as well.

Another story that I heard from Ghana was of an American woman visiting a small, isolated village.  The women of this village had to walk long distances every day to a well where they would retrieve their family’s water for the day and carry it home in large pots on their heads.  They had to do this every day, no matter how hot it was, or how tired they were, or whatever else.  If they didn’t, their families wouldn’t survive.

The American woman expressed her amazement at this work, and even her pity on them for having to perform it.  She explained to them that in her home, the water was right inside.  That she could turn it on or off as she needed, and that there was always more than enough.  To her surprise, the women of the village expressed their pity for her - about how sad such an existence must be.  The American woman was confused about how running water and indoor plumbing might elicit pity from these poor women of the village.  They said, “We make the walk each day together.  We tell each other stories.  We give each other advice.  If you don’t have to go to the well each day, when do you do that?  When do you tell your stories?”

What had seemed to the American woman as a pitiful existence, was seen by the Ghanaian women as the riches of their community - as something to be valued.

We all take a turn as the least and the lost and the last.  We usually try very hard to hide it, but we all know what it’s like to be on the outside looking in.  Whether we’re facing relative financial hardships, or an absence of real community, or fractured relationships, or failing health, or whatever else - we’ve all suffered in our own way and we’ve all felt like we were at the back of the line.

Just like my trip to Ghana helped me to see the world from a wider perspective, our observance of Lent is meant to do that for us as well.  As we walk with Jesus into the wildernesses inside us, it opens our eyes not just to ourselves, but to all that we share with the world around us - the pain, the joy, the ways in which we’re the first: the privileged and the powerful; and the ways in which we’re the least, the lost, and the last.

Neither the last/first dynamic, nor the season of Lent are about guilt or depravation, but they are about recognizing that wherever we are - however we feel - Christ is longing to gather us into the comfort and security of God’s embrace, as a mother hen gathers her brood.

In that embrace there are no firsts nor lasts.  No one is powerful and no one is lowly - at least no more than anyone else.  No one’s existence or comfort or security is at the expense of anyone else’s.  There is only love.  Enough for everyone and always more.

When faced with Herod’s threat, Jesus could have fought or he could have fled.  Instead, he loved.

May our own experiences of wilderness, and the broader perspective it offers, give us that same courage.  Amen.
Good Shepherd; Philadelphia

Elizabeth Kaeton said…
Well, you've reached that point where we start taking each other's stories into the pulpit. I've done it with one of yours (a CPE 'on call' story).

Jon M. Richardson said…
Elizabeth, I thought it would amuse you how "all in" this sermon you were. I apologize for not attributing the water story, but I wasn't sure how many of the details I had exactly right, but I figured it worked even without them. But didn't want you feeling the blame if I was wrong :)
February 24, 2013 at 1:55:00 PM EST