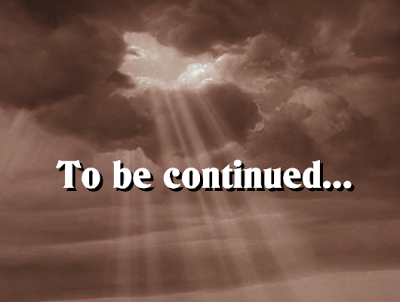 We join the Gospel story this week already in progress from what we read last week.  It’s always true that the vignettes we read are a part of a larger story, but only rarely is it as blatant as it is this week.

Just as last week’s reading might as well have ended with the words “To be continued…” plastered across the screen, this week’s should begin with an announcer saying, “previously, in the Gospel of Luke…”

The episode is literally cut off in the middle.  Last week didn’t say much without the context of this week, and this week means nothing without the background of last week.

Last week we heard Jesus read those familiar words from Isaiah: “The spirit of the Lord is upon me, because he has anointed me to bring good news to the poor.  He has sent me to proclaim release to the captives and recovery of sight to the blind, to let the oppressed go free, to proclaim the year of the Lord’s favor.”

He read those words to the people in the synagogue in his hometown - in Nazareth.  He had been traveling throughout the region teaching and healing and doing wondrous signs, and he had returned to Nazareth - his home - to be with the people with whom he had been raised.

By this point in the story, he was established around the region as a wise teacher and a worker of miracles.  News of this Jesus - Joseph’s son - from the humble home of the village carpenter, had spread back to Nazareth.  It’s only natural to assume that they must have wanted a piece of the action for themselves.  They must have felt some hometown pride in his ministry.  If Jesus could do all of the things that he had done in foreign territories for other people, surely he could do something for the people of Nazareth as well.

This story always makes me think about a scene from the musical “A Chorus Line”.  The show takes place during an audition for a show - a particularly grueling audition, in which the participants are asked to bare their souls for the director, not just to demonstrate their talents.  There are a few songs where the characters talk about the various traumas and humiliations that had brought them to where they are today.  In this one line of one song, the character is remembering her childhood in the voice of her grandmother when she sings, “Why do I pay for all those lessons?  Dance for grandma.  Dance for grandma.”

In his hometown - where his fame has preceded him - I imagine that this must be how Jesus felt.  In his hometown, they couldn’t wrap their minds around his significance.  They just wanted to see some of the tricks that they’d been hearing about, as though he were just another traveling entertainer.

But Jesus knew that the signs and wonders that had come to define him were about more than that.  He wasn’t just a part of some circus act that was there to perform on command.  When he tried to explain what he was about to the people of Nazareth, they became enraged.  They wanted to hurl him off of a cliff at the edge of town.

I think it’s worth asking: what was behind that rage?

Rage is a powerful emotion.  It usually isn’t standard operating procedure for most of us.  It means something.  It comes from passion.

But that they became enraged, speaks to something deeper.

Throughout the lessons that we read today, a recurring theme seems to be that of familiarity.  We hear it in the first lesson from Jeremiah.  God says to the prophet - and by extension, to us: “Before I formed you in the womb I knew you, and before you were born I consecrated you.”  We were known and set apart for the work of God while we were yet in our mothers’ wombs.  When it comes to God, we are not simply some Johnny-come-lately.  We are known, and understood, and accepted with whatever faults or limitations we bring.  And despite whatever faults there may be, we are endowed with the gifts God needs us to have.

We hear echoes of familiarity again in that most familiar passage of Paul’s to the church in Corinth, wherein he speaks to the nature of love: “Love is patient; love is kind; love is not envious or boastful or arrogant or rude…”  You know those words.  We often hear them at weddings, but their advice is helpful in all of our loving relationships.  Love which first blooms in the fertile fields of familiarity.  And despite whatever powers, or prophecies, or knowledge - we remember that it is all for naught without love.

Nazareth must have been a very familiar place for Jesus.  He grew up there.  He was familiar with them and he knew their ways; just as they were with him.  They loved each other - even though they didn’t always understand each other.  Their emotions ran deep.

Love is a power that can fuel every life-giving thing in this world.  But when it is neglected or misunderstood, it can be a place from which deep pain and anger can grow.

Rage is the equal/opposite of love.  You can’t get to rage without love waiting somewhere in the wings.

But he was called to something more.  He was called to bring comfort and freedom and healing to more than just the people of one little town in the Israeli countryside.

The story is still unfolding.  Now we see in a mirror dimly, but soon we will see face to face.  We will come to know fully, just as we have been known.  Amen.
Good Shepherd; Philadelphia