FCS: Hands on a Hardbody

**My apologies - this entry is much later than I'd hoped it might be.  I was hoping to post it opening night, but it got lost in the busy-ness of the final weeks of Lent and preparation for Easter.  Such is the life of a professional priest/amateur theater reviewer!  But at last - here it is! 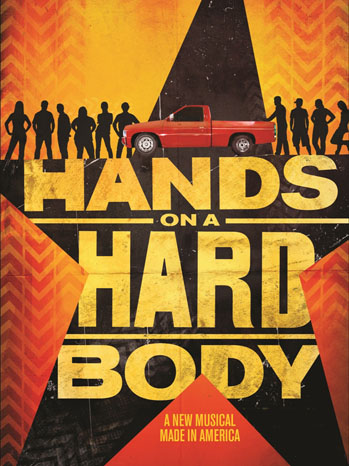 Synopsis: A musical based on the documentary of the same name (that doesn't happen enough!) about ten hard-on-their-luck East Texans who compete to win a new pickup truck at a dealership by keeping their hands on it the longest.

My thoughts: I was really excited about this show.  It's a new musical - and not of the sort that are like pre-packaged, instant commercial successes - like jukebox musicals, or Disney movies remade for the stage, or things like that.  It was of a subject matter that rarely gets the attention of the "big time" New York stage - real life in the South.

To my delight, Hand on a Hardbody delivered.

It wasn't, by any stretch of the imagination, a brilliant theatrical event, or the kind of thing that will shape my theater-going experience for years to come...  But it was light, fun, and relevant, and spoke to contemporary culture.  I wouldn't go so far as to say that it was "important", but it danced pretty close to it.

Right out of the gate, the thing that was most impressive about the Hands on a Hardbody experience was the casting.  It was brilliantly cast!  The stage was filled not with live-action supermodels, as is so often the case on Broadway, but with people who looked like the rest of us.

A perfect example of this is Dale Soules, in the role of Janis Curtis.  She isn't beautiful by unreasonable Madison Avenue standards.  And the design of the show doesn't attempt to make her that way.  She's older that most Broadway personalities.  Her hair is kept out of her face, but it isn't elegantly coiffed.  Her voice is somewhat scratchy and strained.  Her costume is simple everyday clothes - cargo pants and a t-shirt, and a vest like she might wear on the job at a Family Dollar store, or someplace like that.  She isn't the kind of person we typically see onstage.  But the minute I saw her, my first thought was, "I know that lady."  She was the perfect embodiment of the kind of people I interacted with every day as a child in the South.  No Madison Avenue creation could compare with that.  She was real.

And that kind of realism continued throughout the cast.  There were people who were overweight, and people who were gangling, African American, and Latino/a, even a once-upon-a-time cheerleader.  It was a picture of real life.  And it was refreshing on the Broadway stage.

While I very much enjoyed Hands on a Hardbody, I wonder if it will enjoy much in the way of commercial success.  I wonder if most people in the New York audience will really get it.

In the first big opening number, "If I Had a Truck" - the characters introduce themselves by imagining how their lives might be enhanced by winning the contest.  They speak to the kind of East Texas mindset that a truck can help to define you.  It won some laughs from the audience, but the thing is, it's sort of legitimate.  It's a different cultural reality than people in the Northeast understand, so I can see why they think it's funny, but in East Texas, there would be more head-nodding than laughing.

The music, on the whole, was engaging, but not particularly memorable, with a few exceptions.  Notably, nearly a month after having seen the show, I still find myself humming the hook of "If I Had a Truck".

"I'm Gone" was a beautiful ballad that even more beautifully captured the uncomfortable balance that the barely-getting-by people of depressed economies strike between surviving and thriving.

The real reason to by the cast recording, however, if we are fortunate enough to get one, was Keala Settle (in the role of Norma Valverde), in her triumphant performance in "Joy of the Lord".  One of the brilliant aspect of the way this show is presented is the periodic awkward silences.  It gives the audience a sense of the long hours that passed while the contestants were waiting to win.

The magic of this is that in a room of a thousand people, silence doesn't take long to become awkward.

One of these awkward silences is broken by the quiet, to-herself giggle of Norma Valverde.  The giggle slowly grows to guffaws, before erupting into the show-stopping number, "Joy of the Lord" - a rousing, a capella gospel number that shoots through the audience with electric fervor.

The final element I'd like to lift up is the lighting design Kevin Adams.  With subtlety and grace, Adams conveyed not just the steady passage of time - an important aspect of lighting design in any show, but perhaps even more so in this show, with its waiting, and staged tedium - but Adams, with his use of side lighting, and long evening shadows, was able to give the audience a sense of the hot, often oppressive, Texas sun.  Even in the cool of the theater, I could imagine the heat of the sun.  It gave us a sense of the endurance required in the competition.

While I fear that Hands on a Hardbody is not likely to have a terribly long run (and if the published grosses from the last few weeks are any indication, I'm likely to be correct), I do encourage you to see it.  In many ways, from the casting, to the music, to the staging, to the lighting - they're doing a new thing.  It's not universally successful, but it was a good night of engaging theater.  You won't want to miss it.