FCS: The Testament of Mary

** NOTE: usually I'm a pretty serious stickler for not posting reviews before the Official Opening.  I was told that it's impolite to do so, and I don't want to be impolite!  But this show's run is to be so short, and it's so worth your time, that I'm breaking my rule and posting it now.  The Testament of Mary deserves every accolade it can get, and waiting 20-something days to give it just seems unfair to all of you and to this show.  I beg your pardon and understanding. 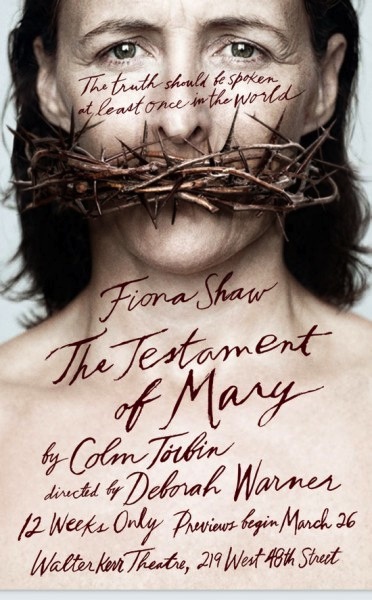 Synopsis: The story of Jesus, told from the perspective of Mary, his mother, after the death of her son.

My thoughts: Truth be told, I wasn't planning to see this show.  Not tonight anyway.  After Lent, Holy Week, and Easter, this priest was suffering from Jesus overload.  Maybe even overdose.

But...  It had been a few weeks since I'd been to the theater, and the itch was getting pretty strong.  I was searching the TDF listings every day, desperate for some light, tap-dancy thing on a big stage with a big cast and a big orchestra.  Something that would transport me on this Easter Week...

But it never came.

I had just about resigned myself to the idea that my theater itch would have to wait for next week (I've already got my ticket to see Jekyll & Hyde), when a friend dropped by my house for an afternoon visit on Monday.  He's a theater professional, and I'm a theater junkie, so among the many aspects of our lives that we discussed, we talked about what we'd seen lately.  His recommendation for The Testament of Mary was strong, so I took him at his word.  Sure - it wasn't a musical.  Sure - it was a one-woman play.  But he assured me it would be worthwhile.

Tonight, when I left the theater, I couldn't text him quickly enough to thank him for his recommendation.

The Testament of Mary is rich, emotional, and raw.  It will break your heart, and challenge you.

I'm often teased by friends for going early to the theater.  I'm often in the house as soon as the doors open.  It's rare that I'm straggling in minutes before curtain.  I like to sit in the space, and explore it with my mind.  What are the elements that are laid out before me.  Is there a curtain?  What kind?  What decorations adorn the house?  These things play a role in the experience that is being set up for me.  I want to take them in and settle myself into the experience, so that when the meat of it begins, I'm ready to go where the production is taking me.

So while I'm often teased for that, tonight was one of those nights when that pattern of mine really paid off.  The set was exposed, and there was so much to take in from the moment I found my seat.  I'll often make some preliminary notes as I sit in the house those few minutes early, but tonight I took more than two pages of notes before anything began - all just on the brilliant set designed by Tom Pye.

And though the show didn't really begin until 8:00 (quick warning here - not the customary 8:05 or 8:07, but pretty closely to 8:00 itself - and there is NO late seating at this performance. So get there on time!) - so though the show didn't really begin until 8:00, the performance really began at about 7:45.  Fiona Shaw walked across the cluttered stage carrying bulky fabric, past the vulture (a real, living vulture!) standing with its wings spread, and she entered a glass box.  She pulled the blue fabric over her head and over her faded peach dress into a headdress, she held a few lilies in her right arm and an apple in her left hand.  She sat in the glass box starring blankly ahead.

Audience members were allowed onto the stage.  They streamed on by the hundreds.  Walking around the clutter and starring into the box, with the iconic representation of Jesus' mother starring blankly back out.  It was a powerful symbol.  This woman had changed the world, and we've put her in a box.  We've silenced her.  We look on her as if she's some exhibit.  We've made her to absorb all that we need her to be, but we keep her trapped, and unable to speak for herself - unable to be and think for herself.  Merely an icon of what we imagine for her.  What we need from her.

Soon, however, the hour comes.  The audience returns to their seats, the box is raised, and Mary exits.

Tradition holds quite strongly to the view of Mary as the virginal, demure, subservient woman (undoubtedly a tradition finely crafted by men).  But the Mary that emerges from that glass box is different altogether.  She is broken.  Mad.  Angry and addicted.  Not faithful.  Not even doubtful, really.  But unbelieving and betrayed.

She goes on to tell a few of the stories from her son's life as she remembers them.  She speaks of the rising tensions around him.  She speaks of her disdain for the "band of misfits" who follow him.  When she finally gets around to recounting the crucifixion, it all becomes clear - the cigarettes and the liquor, the madness and the passion - while many had seen her son as a savior, his life wasn't a source of salvation for her; it had left her broken.

How could it be any other way?

How could any mother endure the trauma that Mary must have endured and come out any other way?

I would expect that there are a lot of people who will find this view of Mary inflammatory.  It is challenging, to be sure.  This Mary denies all divinity of Christ.  She speaks of the stories about his virgin birth and resurrection as merely tales - no, let's be honest... lies - made up by his followers to legitimize his Messiahship.

As a priest, I suppose I'm supposed to be offended by it, but the truth is I'm not.  Far from offended, I was excited by this exploration of the character of Mary.

I've often preached that I'm much more moved by the humanity of Jesus than by his divinity.  The same can be said for this experience of Mary.  She was human, and real, and flawed, and broken - just like so many of us.  She had been through unimaginable trauma.  Seeing her in this light made her, for me, much easier to relate to.

For this Mary, the question all comes down to, was it all worth it.

Whether or not any of us come to the same answer that she comes to, the question is worth considering.

And this Mary - though challenging to the traditions that surround her - is at least effective in posing the question.  When you go to meet her - leave your piety and your sensibilities, and your ability to be offended at the door.  They usually don't serve you well, anyway, and they certainly won't serve you in this experience.  Don't put any halos on Mary, but see her for what she is: a woman, a mother, and a fellow sojourner in humanity.  You may not walk away with her same view of the world - I'm pretty sure I didn't.  But your worldview will be enriched for having seen hers.  I know mine was.

Closing arguments:
Post script: This review was a bit of a departure for me.  I've focused almost entirely on the brilliant story telling by Colm Tóibín.  I have said almost nothing about the brilliant set design by Tom Pye.  I've said nothing about the also brilliant lighting design Jennifer Tipton.  I rarely comment on sound design, but the original music and sound design by Mel Mercier was just as brilliant as everything else.  I haven't really said anything about the truly radiant performance by Fiona Shaw.  But that's because it just all came together so perfectly.  The acting, every aspect of the design of the show, and the production's direction were all simply flawless, in my view.  They freed me to really immerse myself in, and revel in, this magical new telling of an incredibly familiar story.  I am grateful for that freedom beyond my ability to express.  But please don't interpret my silence on these aspects of the show as anything less than my belief that they were exactly as they should have been.
From the Cheap Seats

Name-calling is mean. It is outside what I would consider the acceptable behavior set for someone who claims to be Christian.

I misread your comment at first and thought you simply said "Episcopalian" - but after looking closer, I see that you were being silly and mean, so I deleted the comment.
April 7, 2013 at 9:35:00 AM EDT