** NOTE: another pre-Opening post...  My reason this time, again - it's a short run, so time's a wastin'!  Also, this is a Broadway ending to a prior national tour, so by my judgement, the show should be pretty much set - they're not mounting it for the first time.  So here we go! 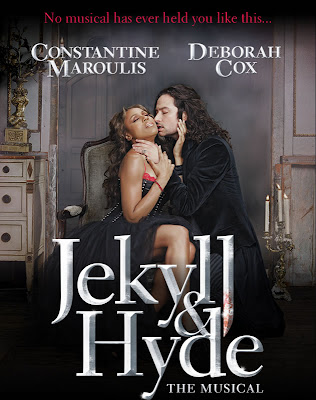 Synopsis: A musical adaptation of Robert Louis Stevenson's tale of Dr. Jekyll and Mr. Hyde - the doctor/researcher in Victorian London who's experiments on himself go terribly wrong, unleashing an inner demon.

My thoughts: I had not seen Jekyll & Hyde before, but I've long appreciated several of the songs.  I've also long noticed that the show is a bit odd in its writing, in that much of it is traditional musical theater, but inexplicably, there are several "pop" songs that seem to simply appear in the score from out of nowhere.  These are some of the strongest songs in the show, but as an experience of theater, it can be a bit disconcerting.

Sadly, however, this was not the most disconcerting aspect of this production.

I went into this performance with a mix of expectations.  On one hand, I feared the casting might be a bit too "Hollywood" for my tastes.  But on the other hand, much of the creative team assembled was spectacular.  I've seen several shows directed by Jeff Calhoun.  Tobin Ost has become one of my favorite set designers - largely after his triumph on Newsies.  The same with the lighting designs of Jeff Croiter.  I had heard mixed reviews of the projection designs of Daniel Brodie, but I have yet to see his work, so I remained open.

And many of the creative team contributions to the show were excellent.  The once-again magnificent set design of Tobin Ost was the true star of the show - or at least my experience of it.  The flexible and moving components to the set were angular and askew - giving dimension to the inner turmoil of Jekyll/Hyde, and the insanity and criminality that came to define him.  Ost's designs were very well conceived and executed.

Ost also served on this production as the costume designer.  While, on the whole, that work was as stunning as the rest of his work - there are glorious, Victorian era inspired costumes throughout the show - the one notable exception was the peculiar glimmering and capris-length cassock worn by the Bishop of Basingstoke.  As a priest, I certainly understand that clerical fashions do have a history of evolving, but I'm unaware of any cassock in that style outside of possibly Broadway's Sister Act.  And frankly, most things from Sister Act should stay right where they are -- and FAR away from me.

Despite the mixed reviews I had heard in the past, Daniel Brodie's projection designs were excellent.  He used his craft in ways that I most appreciate - as a subtle supplement to the limitations of the set, giving texture, color, and location to flexible pieces.  His use of video and animations was judicious - always in support of the story and never stealing the spotlight, as it were.  I look forward to continuing to see his work - particularly now that I've experienced it for myself!

Unfortunately, the full experience of Jekyll & Hyde did not live up to the high bar set by Mr. Ost and Mr. Brodie.  The "too Hollywood" cast fear I had proved true.

The two "above the title" stars were varying degrees of disappointing.

Constantine Maroulis, while a brilliant studio artist, was lacking on the stage.  Too often, Constantine, the man, got in the way of Dr. Jekyll and Mr. Hyde, the character.  I began kicking myself early in the first act for not keeping a mental tally of the number of times I caught him fidgeting with his microphone.  It was incessant - and continued throughout the show.  His shining performance was in "This is the Moment".  It was thrilling and left me in chills.  But then, amidst the thunderous applause, he broke character to bask in the accolades.  That sort of thing might work on Rock of Ages or American Idol, but in a show like this, it flattened the mood.

Deborah Cox was not nearly as disappointing, but at a few points, seemed not up to the task vocally.  She redeemed herself in Act II in "A New Life".

My favorite performances, however, came not from "above the title", but from Teal Wick in the role of Emma Carew and Brian Gallagher in the role of Lord Savage.  Both of them were a delight to hear and they delivered gripping and convincing portrayals of their characters.

On the whole, I'm glad to have finally seen this show that I've admired for so many years, and to have experienced the brilliant contributions of so many creative team members, but the production rests a bit too heavily on it's stars - who can't quite bear the burden.

Mel said…
Oh wow, I could have written these sentiments, albeit without the same clarity and specificity. Disappointed by the stars, happy with other cast, impressed by the multimedia and set.
April 12, 2013 at 9:47:00 AM EDT