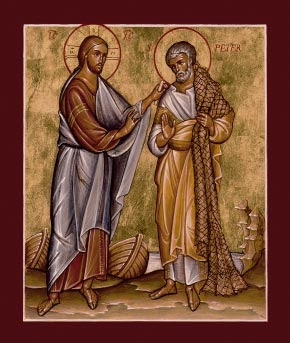 Last week felt like something of a return to the “back to normal” life for the church, after all of the excitement around Easter Day.

This week, in this epilogue to John’s gospel, we hear of the sort of “back to normal” life for the disciples.

The 21st chapter of John always makes me think of my friend, Megan, and the story she tells about her uncle.  Whenever he’s a part of a social engagement and is ready for it to be finished, he’ll simply slap his hands on his legs, say, “Well, okay…”, and stand up and walk out of the room.

Over the years, this has become a kind of inside joke between Megan and me.  We talk on the phone almost every day, and if there’s a lull in the conversation, one of us will just say, “Well, okay…”, we’ll laugh, and the conversation ends.

In the 21st chapter of John, I can almost hear Peter saying, “Well, okay…”

The followers of Jesus had been through so much.  He had called them.  They had followed.  He had taught them.  They had grasped some of it.  He had done signs and wonders in their sight.  They had marveled at his power and come to worship him as the Son of God.

In the more recent days, things had changed.  They had been a part of the Last Supper.  They had prayed with him in the garden.  They had seen him arrested.  They had betrayed him and they had denied him.  They had run for fear of their own safety.  They had hidden together from the crowds.  They had witnessed his crucifixion and even his resurrection.

After all of this - the unusual years that climaxed into those final, dramatic days: the jumbled emotions of heart wrenching pain, and earth-shattering joy - after everything, they must have been sitting in that room together in a kind of stunned silence.

Where could they go from here?

As the stun began to wane and the silence grew into pregnant anticipation, Peter must have slapped his hands on his legs, stood up and said, “Well, okay…  I’m going fishing.”

At some point, life had to go on - even if now it couldn’t be recognizable as compared to the life they had before.

When your world is turned upside down, there comes a juncture wherein you simply have to go on.  And if you don’t know how to go on, you go back to the basics.

He might not have known what anything in the world meant now, but he knew how to fish.  No matter what had changed, that simple act was a constant he (and they) could still cling to.

My first serious exposure to the Episcopal Church was at Trinity Episcopal Church in Clarksville, Tennessee.  I was in school there at the time, and studying vocal music, and my voice teacher had offered me a paid position singing in the parish choir.

When I found this community, they were in the midst of recovering from a terrible trauma.  Their church and parish hall buildings had recently been destroyed by a devastating tornado.  Within weeks after the storm, while the community was just beginning to wrap their minds around the work of rebuilding, their rector suffered a heart attack and died.

The people of the parish were, understandably, devastated.  Everything that they thought was holding them together had been crushed in one swift blow after another.  By the time I found them, they were basically wandering in a stupefied daze.

Though they had no idea where to begin, the one thing they did know was that they needed to worship.  Their building was gone.  Their priest was gone.  And if they didn’t worship, their community would soon be gone, too.

So they worshiped.  They borrowed space from the local Roman Catholic church.  The choir practiced in the organist’s home.  Soon they had an interim rector.  And though things would be different, and maybe even a little uncomfortable for a while, they stumbled through by simply doing what they knew how to do.  They went back to the basics.

That’s where we find Peter and the other disciples today.  It may not even be that the shock was even gone yet, but it had somehow lost its grip on them.  Maybe they had simply grown bored with it.  But after the shock, somehow, life had to keep going.

They may not have known how to do anything else in their lives now, but they still knew how to fish.

Back to the basics.

The funny thing is - the amazing thing, really - is that, even in that: even in the most hum drum, ordinary of tasks - even in just fishing - even there, they would find Christ in their midst.

The people of Trinity Church did, too.

After the church buildings were rebuilt, and after they had moved back in, and after they had called their next rector, they reflected on their time in the wilderness, and realized that it had made them stronger.  It had brought them together in ways that they had never been truly “together” before.  And through their unity in worship and prayer in some of the darkest days of their community’s history - through getting back to the basics of what made them a Christian community - they realized that they had seen Christ in their midst.

Easter Day here was fun.  It was grand, and big, and beautiful.  It was dazzling.  I hope you felt that there was something holy happening here that day.  I know I did.

Now things are getting back to normal.

Things are getting back to normal, but it’s a new normal now.  A new normal, with a renewed appreciation for the truth of Christ among us.

We’ve been through our own little wilderness, and now we’re on the Resurrection side of reality.  When the bigger wildernesses come, we can traverse them with the sure and certain hope that new life will be their product.

That’s the way it works.  Just when we start to settle in, we see Christ, and we remember that normal will never be normal again.