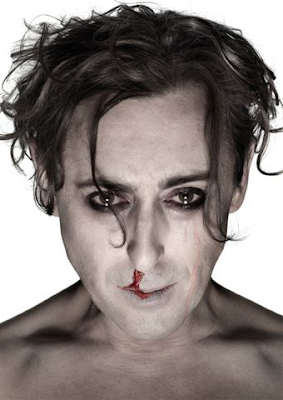 Synopsis: Alan Cumming's nearly one-man interpretation of the classic play, as previously produced by the National Theatre of Scotland.  Set today, in a mental hospital.  Cumming's character is the patient.

My thoughts: I don't really know where to begin.

As an experience of William Shakespeare's Macbeth, the production didn't really reach me.

But as an exploration of debilitating, and perhaps even criminal mental illness, there was something there.

I've interacted with Macbeth for basically my whole life.  Some of my earliest memories are of my father reading it (along with others of Shakespeare's works) to me as I sat on his lap (yes, I had a weird childhood.  But that's how it was).  Though I haven't really encountered it much in many years.  Even so, there were lines that stood out for me - things that I remember hearing in my father's voice, and comparing it to how I heard it tonight through Mr. Cumming's voice.

So while I've had some exposure to the play, even so, I wouldn't consider myself particularly strong on the subject.

But despite the exposure I have had, and despite even the sense of familiarity I felt from time to time; I still very often found it hard to follow.  It was an ongoing chore to differentiate the characters - as well it probably should have been.  A one-man interpretation of Macbeth is a monumental undertaking, but it wasn't the best way to experience it.

The experience, however, seemed less about Shakespeare's work and more about Alan Cumming's work.

And his work was masterful.

Macbeth, in this interpretation, was less about Macbeth, and more simply the medium through which we could experience the unnamed character living his own madness through its words and emotions.  There were fleeting moments of tinted clarity, but mostly it was inner turmoil, played out through another's words.

As turbulent as the institutionalized man's inner character was, the production was equally (and balancingly) crisp.  The set was a cool, foamy green tile, interspersed with dingy whites.  The lights - mostly soft whites - fell in fuzzy-edged pools within pools in various places and scenes.  There were no hard lines, with the clear exceptions being the portals to the world outside this sequestered place.  The doctor and orderly attending to the patient could view him from a rectangular glass enclosure high above the room.  When they entered and exited, the locked door would open shining hard, sharp lines into the cold and rigid softness of the patient's room.

There was something really evocative about the production, but I still can't quite put my finger on it.  It was sexy and frightening.  It was uncomfortable, but sometimes amusing and always jarring.  There was something going on that we were never quite allowed into.

But all of that said, it was truly original and creative.  This Macbeth is certainly not for any kind of purist, but it's worth exploring.  I can't say that I really "got it" - whatever that means - but I was glad to have been with it for a while.