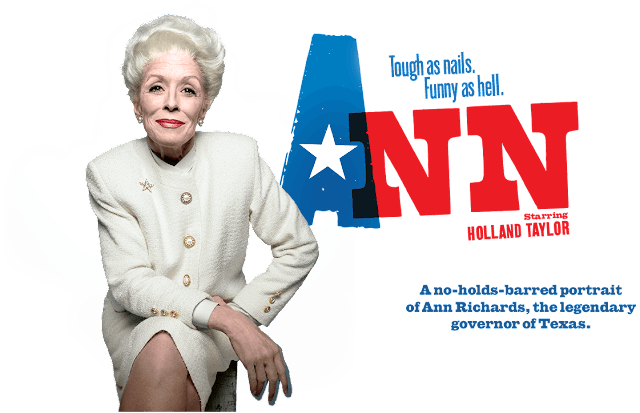 Synopsis: A first person retrospective on the life of the former governor of Texas, Ann Richards - a legendary Texas personality.

My thoughts: I was VERY excited to see Ann.  I remember growing up seeing her campaign ads on television in Shreveport, Louisiana.  In my liberal, Southern home, Ann Richards was a much-admired icon.  So, while I usually prefer musicals, I made an exception for Ann because of my deep admiration for Ann Richards as a person, and my interest in her life as the subject of a play.

Holland Taylor's portrayal of this animated figure is admirable.  My southern ears often cringe when people from beyond our region attempt to look, act, and sound like us.  But to my delight, the Philadelphia native was effective.  Not flawless, to be sure, but better than most.

Holland Taylor's writing, unfortunately, did not reach to heights of her performance.  While it was funny and occasionally off-color - much as Governor Richards was, herself - the character that Taylor presented lacked depth.  She delivered one-liners and zingers that had the audience laughing, and she told biographical facts about the former governor's life, but failed to draw it all together in an inspiring and moving way.  At times, the evening felt like little more than a very entertaining historical lecture - not unlike one might find in the streets of Philadelphia from tour guides dressed as Ben Franklin or Betsy Ross.

The premise of the show's beginning was that the governor was giving a graduation speech at an unknown Texas college.  Somehow along the way, however the premise seemed to shift at first to a flashback of the governor in her office, and then, unpredictably to her office in New York City after leaving Texas, and then even more inexplicably, to after her death and remembering her life.  Frankly, this final premise would have made more sense for the continuity of the story as a whole - but shifting premises throughout the performance caused me to disengage with the experience of the character and instead, spend my energy questioning where we were at a given moment and how we got there.

The scenic design, by Michael Fagin, was beautiful and intricate - particularly in the Governor's Office scene, with one very notable exception.  For some reason, Richards seemed to be sitting on the wrong side of her desk.  She sat across the desk from the audience, but the desk drawers were facing the audience.  It was peculiar and distracting.  Was this some quirk of Governor Richards?  Or was it an oversight on the part of the scenic designer?  There was one moment where the governor opened a drawer to retrieve something from it, but couldn't this have been done from the other side of the desk?  This feels like a nit-picky criticism, but these little things can be a real distraction.  If a set is intended to be realist, such details must be represent the reality that the design team is attempting to convey.

The projection design, by Zachary Borovay, when functional, was effective.  For example: in the opening scene, the famous Ann Richards keynote address at the Democratic National Convention was portrayed.  Video of the actual event was projected onto the kind of "pull down" projector screen one might find in a typical school.  As the video progressed, Taylor's first appearance was behind the screen, collaboratively with the projections, making an interesting hybrid between live action and video.  It was an effective use of projections.  As the scene ended, however, the projections grew beyond the boundaries of the screen - effectively killing the effect.  Though I love the tasteful and measured use of projections in theater, this is an example of the designer taking a good thing and pushing it beyond its usefulness.

In preaching, one of the early mistakes that new preachers often make, is that they try to tell the congregation everything they know in their first sermon.  It seems that projection designers often seem to make this same kind of mistake - they use every trick in their portfolio, without regard to whether or not it is helpful.  Oftentimes less is more.

Though my criticisms of this production may seem somewhat harsh, the real takeaway is that it was a good night at the theater.  It was funny without being silly, and it shared the story of a character who could use a lot more popular attention.  It made me want to read Ann Richards' writing.  It engaged me enough to want to dig out more.  So while it was, in some significant ways, a flawed attempt, it was a good attempt.  I'm glad that the production is running and I am glad to have seen it!  I hope others will as well.