Getting close to Jerusalem 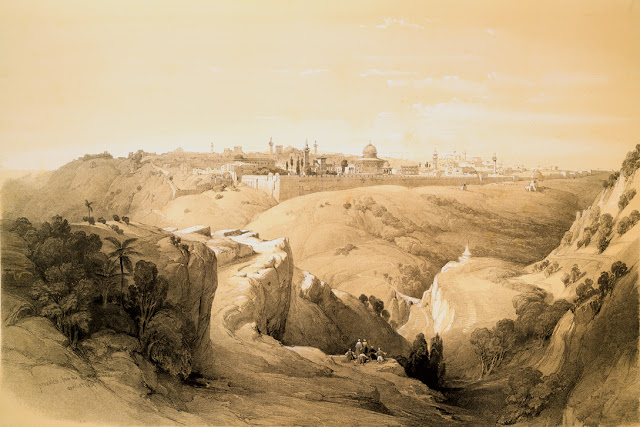 We’re getting close to Jerusalem, now.

In the story we’re told that this dinner and anointment happened just six days before Passover.  And in the story of Jesus, Passover means something else entirely.

Moreover, we’re told that it happened in Bethany - the quiet little village just beyond the Mount of Olives - where Jesus will pray and be betrayed.  As the crow flies, it’s just about two miles away.  You could almost hear the Palm Sunday crowds and their shouts of “Hosanna!” from there.

We’re also told that it’s all happening in the home of Lazarus.  You know Lazarus.  The one over whom Jesus wept.  The one who, just days before, had died.  The one who now hosts him in his home.

John tells us that from the day that the high priests of Jerusalem had learned that Lazarus had been raised, they had planned to put Jesus to death. (John 11:53)

The threat he posed to the established authority was too great.  He had to die.

We’re getting quite close to Jerusalem, indeed.  Along with all that that entails.

You have to imagine that the tension was rising.  It was unspoken among these close friends, and it was tempered by the still-fresh joy that Lazarus was still among them, but there was something electric in the air - something that said something big was about to happen.

Jesus certainly knew.  After giving life back to Lazarus, Jesus went into hiding.  He no longer “walked openly among the Jews”. (John 11:54)

He knew he was getting closer to Jerusalem, and those closest to him could feel the shift.

Perhaps it was in an effort to ease that growing tension that Mary launched into such a lavish display of affection.

And perhaps it was out of that tension that Judas exploded into a fit of rage at the waste.  Perhaps he felt threatened by the tension in the air, and when we feel threatened we often want to retreat, to hoard our resources, and to reserve them for leaner times.

One thing was clear - at least to the writer of the gospel - Judas wasn’t protesting about what he said he was protesting about.  It was about something deeper.  Something hidden.

John makes that much clear.  Judas cried out for the poor, but we know he didn’t really care.

Unless you’ve been hiding under a rock this week (and maybe even if you were), you had to have heard the news that our Roman Catholic brothers and sisters now have a new Pope.

The former Archbishop of Argentina is a member of the Jesuit order - the Society of Jesus - a monastic order that has been traditionally known for its commitment to education and science, and it’s embrace of the lowest and too-often forgotten members of our communities.

Throughout his life up to this point, Pope Francis has been recognized for his commitment to the poor.

It’s been interesting to hear this discussed by the American news media.  We don’t often hear or have conversations about the poor in our popular culture.  Even in recent years, when we’ve been talking about things like income inequality, the conversation is usually focused more on the very wealthy - not on compassion for the poor.

So perhaps this will be the new Pope’s lasting contribution.  I’ve heard many people complain and worry about the Pope’s conservative beliefs.  It’s unlikely that he will usher in any new thinking for the Roman Catholic Church about things like women in leadership, or contraception, or marriage equality, or the future of the celibate priesthood.

But at least he has us talking openly about the poor.  That can’t be all bad.

I’m not convinced that it’s actually going to lead to anything - like policy shifts, or significant increases in charitable giving - at least not right away; but it seems promising to even have it mentioned in our wider conversations.  It’s at least a step in the right direction.

The writer of John makes no bones about it - Judas didn’t actually care for the poor.  But, just as with the journalists and television anchors this week, it must have been a big step in the ministry of Jesus even to have him talking about it.  The message was getting through, even if it was just being spun to serve his own personal interests.

But in these last days, it must have brought Jesus comfort to know that the message was, at least, starting to get through.

He knew his next steps.  He knew that he was getting closer to Jerusalem.  He knew that everything was about to change: for himself, for this movement that would become his church, and for everyone whom he loved.

When we stand on the precipice of the unknown, we’re bound to feel the tension.

But whatever our response, the anxiety and the tension around change is real.

That’s what Jerusalem represents in this story of ours: tension.  The unknown.  Suffering.  Betrayal.  In short: change.

And now we’re getting quite close.

The story isn’t over yet.  It’s just about to change.

The only thing left to do is to pray.

Almighty God, you alone can bring into order the unruly wills and affections of sinners: Grant your people grace to love what you command and desire what you promise; that, among the swift and varied changes of the world, our hearts may surely there be fixed where true joys are to be found; through Jesus Christ our Lord.  Amen.
Good Shepherd; Philadelphia

Elizabeth Kaeton said…
For some, change is the ultimate betrayal of the illusion of the security of the present - and those who are agents of and for change are the ultimate manifestations of a modern Judas.

The problem with Judas is that he put his faith in the institution. The irony, of course, is that those who do that see the agents of change as Judas.

Katherine Bickerton said…
Jon, You paint pictures with words and they are clear and vibrant and deepen my understanding. Blessings to you as we walk toward Holy Week.
March 17, 2013 at 6:30:00 PM EDT