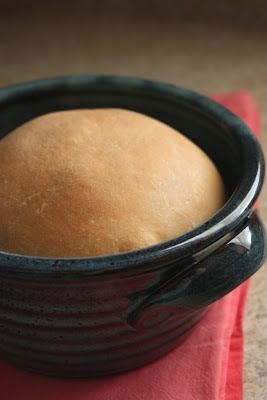 These are the two images we hear in the readings tonight: pottery and bread.  Humble human creatures - stuff of the earth, that through human toil become elevated - they take on new meaning and importance.

It’s in signs of humility like these where God often appears most clearly.

I’ve never done pottery, but I have known potters and have been amazed at the symbolism that emerges from their craft and their art.  Sitting at her wheel, the potter wets her hands and slowly molds the dry, dead lump into something more.  As if by magic, it grows and stands to attention, a hole is pushed down in the center, and the creation rises up higher than it was before and opens itself wider into a new creation.

But she molds again.  She takes it back to its original form and tries again - however many times it takes until the image in her mind makes its way out through her hands and embodied into the clay.

I do, however, have more experience with bread, and it many ways, it’s quite similar.

We start with stuff from the earth: wheat and water, salt and yeast.  We mix the ingredients into an unrecognizable and unusable lump.  Kneading them together with our hands, they begin to take on a new life.  With time and patience, they rise up.  We beat them down and knead them again, but again, they rise.  With more time and patience and also a bit of heat, they are transformed, from the unusable lump it once was, into actual sustenance.

Throughout most of this Lenten season, I’ve been preaching about self-examination.  Lent is a time that we set aside in our lives each year to look inside us for something that had been lying dormant - some emotion or insight, some revelation of God or some deeper awareness to where we’ve been called to minister in God’s name.

But as this season turns toward Easter, it’s time for us to shift our focus.  Soon Easter will be dawning.  And like the bread and the pottery rising, we need to begin looking for ways to find new life in the world around us.

Where will we see new life rising up?

If experience is any indicator, we’re most likely to see it not in the things that we tend to glorify or the grandeur that we most easily admire.  New life is likely to be a bit humbler than we’d normally expect.  It’s likely to take some work.  And it’s likely to grow from simple beginnings into some final product that turns out to be more than just itself.

On that first Easter, new life was found by women humbling themselves to dress the dead.  And it was found in an unlikely itinerant Palestinian rabbi.  Born the homeless son of an unwed mother, he would grow into something bigger than just himself.  He would be bread.

As we walk the streets of East Falls and our wider communities over these next few weeks, I invite you to join me in looking for the humble beginnings of something more.  Look for resurrection and new life.  Not at the tops of our beautiful steeples and towers and altars, but in the streets.  In the gutters.  In the eyes and hearts of our neighbors.

That’s where God will be working.

That’s where we need to be working, too.   Amen.
Good Shepherd; Philadelphia